This is mostly an eBooks post, so no picture of the one book that came in the mail lately. I seem to be getting review copies more and more through electronic means and it's actually kind of nice. I feel like I read books more quickly this way and books won't have to start replacing the kids. :D


Blurb from book one: A BRAZEN HEIST Captain Jean-Luc Picard and the Enterprise crew race to find out who has stolen Data’s android brother B-4—and for what sinister purpose. A BROKEN PROMISE One desperate father risks all for the son he abandoned forty years ago—but is he ready to pay the price for redemption?

A DARING MISSION Against overwhelming odds, and with time running out, Commander Worf has only one chance to avert a disaster. But how high a price will he pay for victory?

The Daylight War (Demon Cycle #3) by Peter V. Brett [Amazon] Del Rey - This is easily my most anticipated book of 2013. Can't wait to read it, it's actually a wonder I haven't dropped everything else already.


With The Warded Man and The Desert Spear, Peter V. Brett surged to the front rank of contemporary fantasy, standing alongside giants in the field like George R. R. Martin, Robert Jordan, and Terry Brooks. The Daylight War, the eagerly anticipated third volume in Brett’s internationally bestselling Demon Cycle, continues the epic tale of humanity’s last stand against an army of demons that rise each night to prey on mankind.

On the night of the new moon, the demons rise in force, seeking the deaths of two men both of whom have the potential to become the fabled Deliverer, the man prophesied to reunite the scattered remnants of humanity in a final push to destroy the demon corelings once and for all.

Arlen Bales was once an ordinary man, but now he has become something more—the Warded Man, tattooed with eldritch wards so powerful they make him a match for any demon. Arlen denies he is the Deliverer at every turn, but the more he tries to be one with the common folk, the more fervently they believe. Many would follow him, but Arlen’s path threatens to lead him to a dark place he alone can travel to, and from which there may be no returning.

The only one with hope of keeping Arlen in the world of men, or joining him in his descent into the world of demons, is Renna Tanner, a fierce young woman in danger of losing herself to the power of demon magic.

Ahmann Jardir has forged the warlike desert tribes of Krasia into a demon-killing army and proclaimed himself Shar’Dama Ka, the Deliverer. He carries ancient weapons—a spear and a crown—that give credence to his claim, and already vast swaths of the green lands bow to his control.

But Jardir did not come to power on his own. His rise was engineered by his First Wife, Inevera, a cunning and powerful priestess whose formidable demon bone magic gives her the ability to glimpse the future. Inevera’s motives and past are shrouded in mystery, and even Jardir does not entirely trust her.

Once Arlen and Jardir were as close as brothers. Now they are the bitterest of rivals. As humanity’s enemies rise, the only two men capable of defeating them are divided against each other by the most deadly demons of all—those lurking in the human heart.


The Great Reawakening did not come quietly. Across the country and in every nation, people began to develop terrifying powers—summoning storms, raising the dead, and setting everything they touch ablaze. Overnight the rules changed…but not for everyone.

Colonel Alan Bookbinder is an army bureaucrat whose worst war wound is a paper-cut. But after he develops magical powers, he is torn from everything he knows and thrown onto the front-lines.

Drafted into the Supernatural Operations Corps in a new and dangerous world, Bookbinder finds himself in command of Forward Operating Base Frontier—cut off, surrounded by monsters, and on the brink of being overrun.

Now, he must find the will to lead the people of FOB Frontier out of hell, even if the one hope of salvation lies in teaming up with the man whose own magical powers put the base in such grave danger in the first place—Oscar Britton, public enemy number one...

The Red Wolf Conspiracy (Chathrand Voyages #1) by Robert V.S. Redick [Amazon] Del Rey - Actually, I downloaded the entire series and this is supposed to have one of the better series endings around. Hopefully I get there.


Told with infectious joy and enthusiasm by an immensely talented new writer this is a landmark fantasy debut. The Chathrand - The Great Ship, The Wind-Palace, His Supremacy's First Fancy - is the last of her kind - built 600 years ago she dwarves all the ships around her. The secrets of her construction are long lost. She was the pride of the Empire. The natural choice for the great diplomatic voyage to seal the peace with the last of the Emperor's last enemies. 700 souls boarded her. Her sadistic Captain Nilus Rose, the Emperor's Ambassador and Thasha, the daughter he plans to marry off to seal the treaty, a spy master and six assassins, one hunderd imperial marines, Pazel the tarboy gifted and cursed by his mother's spell and a small band of Ixchel. The Ixchel sneaked aboard and now hide below decks amongst the rats. Intent on their own mission. But there is treachery afoot. Behind the plans for peace lies the shadow of war and the fear that a dead king might live again. And now the Chathrand, having survived countless battles and centuries of typhoons has gone missing. This is her story. 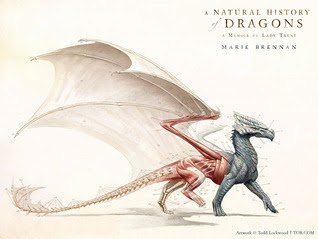 A Natural History of Dragons: A Memoir by Lady Trent by Marie Brennan [Amazon] Tor - I've heard good things about this author and this book simply intrigues me. Not a bad start really.


Not a day goes by that the post does not bring me at least one letter from a young person (or sometimes one not so young) who wishes to follow in my footsteps and become a dragon naturalist. Nowadays, of course, the field is quite respectable, with university courses and intellectual societies putting out fat volumes titled Proceedings of some meeting or other. Those interested in respectable things, however, attend my lectures. The ones who write to me invariably want to hear about my adventures: my escape from captivity in the swamps of Mouleen, or my role in the great Battle of Keonga, or (most frequently) my flight to the inhospitable heights of the Mrtyahaima peaks, the only place on earth where the secrets of the ancient world could be unlocked.

Even the most dedicated of letter-writers could not hope to answer all these queries personally. I have therefore accepted the offer from Messrs. Carrigdon & Rudge to publish a series of memoirs, chronicling the more interesting portions of my life. By and large these shall focus on those expeditions which led to the discovery for which I have become so famous, but there shall also be occasional digressions into matters more entertaining, personal, or even (yes) salacious. One benefit of being an old woman now, and moreover one who has been called a "national treasure," is that there are very few who can tell me what I may and may not write.

Beyond this point, therefore, lie foetid swamps, society gossip, disfiguring diseases, familial conflicts, hostile foreigners, and a plenitude of mud. You, dear reader, continue on at your own risk. It is not for the faint of heart -- no more so than the study of dragons itself. But such study offers rewards beyond compare: to stand in a dragon's presence, even for the briefest of moments -- even at the risk of one's life -- is a delight that, once experienced, can never be forgotten. If my humble words convey even a fraction of that wonder, I will rest content.

In this first volume, I will relate to you how my career as a lady adventurer and dragon naturalist began, commencing at the creation of my childhood fascination with all things winged, and for the bulk of its length describing my first foreign expedition, to study the rock-wyrms of Vystrana. Common gossip has made the bare facts well-known, but I warn you, dear reader, that all was not as you have heard.