News and Covers Tchaikovsky and Buchanon

First, I hear people are already getting limited, numbered ARCs of Wise Man's Fear [US] [UK] (Kingkiller Chronicle Day 2) by Patrick Rothfuss. Consider me extremely jealous. But mostly I'm just happy that it is in fact a reality. 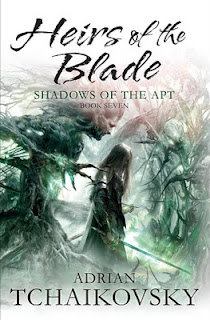 Not so much of a fan here outside of the background: 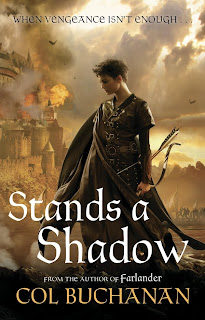 Not a huge fan of models dressed up medievally on my covers. Thoughts?
Posted by Bryce L. at 3:00 PM 3 comments:

Here's another couple in the mail from the nice people at Tor. I mentioned last week that I'm copying (somewhat) The Speculative Scotsman's form in rating each book as his review priority.

Note: All blurbs from Goodreads unless otherwise specified. 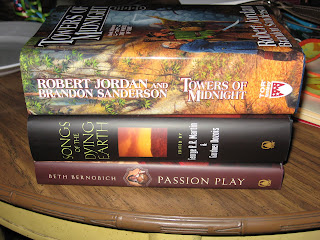 The Last Battle has started. The seals on the Dark One’s prison are crumbling. The Pattern itself is unraveling, and the armies of the Shadow have begun to boil out of the Blight.

The sun has begun to set upon the Third Age.

Perrin Aybara is now hunted by specters from his past: Whitecloaks, a slayer of wolves, and the responsibilities of leadership. All the while, an unseen foe is slowly pulling a noose tight around his neck. To prevail, he must seek answers in Tel’aran’rhiod and find a way—at long last—to master the wolf within him or lose himself to it forever.

Meanwhile, Matrim Cauthon prepares for the most difficult challenge of his life. The creatures beyond the stone gateways—the Aelfinn and the Eelfinn—have confused him, taunted him, and left him hanged, his memory stuffed with bits and pieces of other men’s lives. He had hoped that his last confrontation with them would be the end of it, but the Wheel weaves as the Wheel wills. The time is coming when he will again have to dance with the Snakes and the Foxes, playing a game that cannot be won. The Tower of Ghenjei awaits, and its secrets will reveal the fate of a friend long lost.

Songs of the Dying Earth
Edited by George R. R. Martin and Gardner Dozois [US] [UK]
3 out of 5
(Looks cool, but never read Vance)

Today, in order to honor the magnificent career of Jack Vance, one unparalleled in achievement and impact, GEORGE R.R. MARTIN and GARDNER DOZOIS, with the full cooperation of Jack Vance, his family, and his agents, suggest a Jack Vance tribute anthology called Songs of the Dying Earth, to encourage the best of today's fantasy writers to return to the unique and evocative milieu of The Dying Earth, from which they and so many others have drawn so much inspiration, to create their own brand-new adventures in the world of Jack Vance s greatest novel.

Half a century ago, Jack Vance created the world of the Dying Earth, and fantasy has never been the same. Now, for the first time ever, Jack has agreed to open this bizarre and darkly beautiful world to other fantasists, to play in as their very own. To say that other fantasy writers are excited by this prospect is a gross understatement; one has told us that he'd crawl through broken glass for the chance to write for the anthology, another that he'd gladly give up his right arm for the privilege that's the kind of regard in which Jack Vance and The Dying Earth are held by generations of his peers.

The daughter of one of Melnek’s more prominent merchants, Ilse Zhalina has lived most of her life surrounded by the trappings of wealth and privilege. She has wanted for nothing and many would consider her lot a most happy one. But there are dark secrets even in the best of families and Isle and the women in her family have learned that to be beautiful and silent is the best way to survive.

However, when Ilse fianlly meets the colleague of her father’s selected to marry her, she realizes that this man would lock in her a gilded cage. In her soul, she knows he is far crueler and more deadly than her father could ever be.

Ilse chooses to run from this life. Her choice will have devastating consequences and she will never be the same.

But she will meet Raul Kosenmark, a man of mystery who is the master of one of the land’s most notorious pleasure houses…and who is, as Ilse discovers, a puppetmaster of a different sort altogether. Together they will embark on a journey that will reshape their world.

Lush fantasy. Wild magic. Political intrigue and the games of seduction and treachery to gain control of a kingdom. PASSION PLAY is all of these and more. It is the journey of a woman who must conquer her passions in order to win all that she desires.

Email ThisBlogThis!Share to TwitterShare to FacebookShare to Pinterest
Labels: Passion Play, Some books in the Mail, Songs of the Dying Earth, Towers of Midnight

Reviews - Supernatural: The Unholy Cause by Joe Schrieber and Mockingjay by Suzanne Collins

Here are a couple reviews I've put up at Only the Best, but that I've been slacking on getting up here:

Review of Supernatural: The Unholy Cause by Joe Schreiber

"(Scene: The 90210ers are at school when the new kid shows up. He wants to fit in but doesn't quite know what to say and just happened to have read Supernatural: The Unholy Cause the night before.)

New kid (blurting out the first thing on his mind): So, have you ever heard of this Supernatural thing, it's kind of like the Dresden Files except the main people are much prettier...

Dixon: Yeah dude, that's like my favorite show and like I watch it all the time. It's about demons and ghosts and like all kinds of creepy cool stuff.

New kid: Well, I technically didn't watch anything, I read the book by Joe Schreiber...um...like.

Annie, Dixon, Naomi (uncomprehending): A book? Sick... (all turn and walk away)"

Well, if you read speculative fiction at all, you've probably already read this series and moved on. If you are one of the few who haven't, it's not a bad series. The characters are likable, the situations are made realistic, the story is straight-forward and fast-paced, and it's even thought-provoking at times. It is told in first person, of which I know some aren't the biggest of fans, but overall Recommended.

I always like it when others do posts like this so here goes another attempt. I thought I'd also borrow The Speculative Scotsman's rating system for review priority.

Note: All blurbs from Goodreads unless otherwise specified. 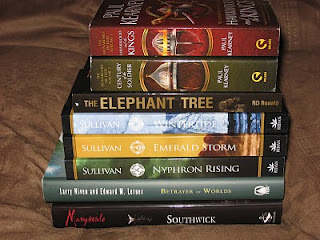 Hawkwood and the Kings [US] [UK], Century of the Soldier [US] [UK] Omnibuses
by Paul Kearney

In a land torn by religious war and chaos, rogue mariner Richard Hawkwood leads an expedition to find a lost continent where safe haven may be found. But before the explorers find sanctuary-they must first survive the journey.

The Elephant Tree
by RD Ronald [US] [UK]

Mark Fallon is an overworked detective investigating a spate of attacks at a string of high profile city center nightclubs. Scott is a dejected 24 year old struggling to make ends meet working for his brother and supplementing his income with a small-scale drug dealing operation. Angela is an attractive 23 year old, raised by her father, a career criminal and small time drug dealer who supplies Scott with cannabis.

This is a chilling tale spanning a few months in the lives of Scott and Angela, where realizations about the present combine with shocking revelations from the past leading to an apocalyptic climax where they no longer know whom they can trust.

5 out of 5
(Can't wait to continue this great series)

Books 3 through 5 of Riyria Revelations. Here's the blurb for book 1, Crown Conspiracy:

THEY KILLED THE KING. THEY PINNED IT ON TWO MEN. THEY CHOSE POORLY.
Royce Melborn, a skilled thief, and his mercenary partner, Hadrian Blackwater make a profitable living carrying out dangerous assignments for conspiring nobles until they become the unwitting scapegoats to the murder of the king. Sentenced to death, they have only one way out…and so begins this epic tale of treachery and adventure, sword fighting and magic, myth and legend.

Betrayer of Worlds
by Larry Niven and Edward M. Lerner [US] [UK]

3 out of 5
(Ringworld is supposed to be good, but therein lies the problem)

Since fleeing the supernova chain reaction at the galactic core, the cowardly Puppeteers of the Fleet of Worlds have just barely survived one crisis after another. The rebellion of their human slaves. The relentless questing of the species of Known Space. The spectacular rise of the starfish-like Gw’oth. The onslaught of the genocidal Pak.

Now fresh disaster looms, as though past crises have returned and converged. Who can possibly save the Fleet this time?

This is the first in a series which is the prequel to Larry Niven's Ringworld series.

Marysvale
by Jared Southwick [US] [UK]

An action-packed story filled with monsters and tyrants, heroes and heroines.

John Casey was ten years old when his mother was murdered...and ten when his father hid the truth from him. Without that knowledge, he has no idea of the enemies that lie in wait.

Now grown up, John lives a solitary life, in a world enslaved by ignorance and superstition, when anyone unusual is treated with distrust and even killed...and John has some very unusual gifts. When he is accused of witchcraft, John does the ony thing he's ever done - Run! That is, until he meets Jane, who lives in the bleak, imprisoned town of Marysvale. Life outside the safety of the town walls means certain death from the brutal monsters that hunt there. However, life inside, under the rule of a tyrannical leader, means no life at all.

As the love between John and Jane grows, the dangers of Marysvale unfold; and for the first time in his life, John discovers that there is something worth dying for.

Email ThisBlogThis!Share to TwitterShare to FacebookShare to Pinterest
Labels: Some Books in the Mail

This looks to be a spin on the zombie theme in a dystopian society. I think I have to read this. Alec's review is up at Only the Best.
Posted by Bryce L. at 11:08 AM No comments:

This is mostly new with a couple of the other videos/interviews showing up, but I'll take anything I can get.
Posted by Bryce L. at 9:26 PM 4 comments: