Review - Songs of the Dying Earth Edited by George R.R. Martin and Gardner Dozois (Part 3 of 3)

It's been a while since I've done one of these posts, I just haven't had the time lately nor the technology (i.e. camera) - hence why I don't have actual pictures of the books in my apartment.
Here are the latest:

Heaven's Needle by Liane Merciel (Ithelas book 2) - I really loved the first novel of Ithelas, River Kings' Road, and I'm excited to jump into this one.

The mountain fortress of Duradh Mal was mysteriously destroyed centuries ago. And now, in its shadow, evil stirs. . . .

Unaware of the danger, two inexperienced Illuminers set out for the village of Carden Vale, at the foot of Duradh Mal, to minister to the people. The warrior Asharre, her face scarred with runes, her heart scarred by loss, is assigned to protect the young clerics. But in Carden Vale they find unspeakable horrors—the first hint of a terrifying ghost story come true.

The Sun Knight Kelland has been set free by the woman he loves, the archer Bitharn, but at the cost of undertaking a mission only he can fulfill. Joined by a Thornlord steeped in the magic of pain, they too make their way to Duradh Mal. There lies the truth behind the rumors of the dead come back to life, flesh ripped from bones, and creatures destroying themselves in a violent frenzy. And if Kelland cannot contain the black magic that has been unleashed after six hundred years, an entire world will fall victim to a Mad God’s malevolent plague. . . . Gears of War: Coalition's End by Karen Traviss - I haven't really read a bad review of anything by Karen Traviss so I'm pretty excited about this one. The only problem is that I haven't read the first three in this "series" nor have I played the game, well, in a while. Any advice? Can I still read this, or are they not very stand-alone?

Gears of War: Coalition's End (Gallery Books; August 2, 2011; $26.99) by #1 New York Times bestselling author Karen Traviss is the eagerly anticipated bridge novel for the Gears of War trilogy - continuing the harrowing story of Delta Squad and their struggle to save the remnants of humanity in a world overrun by a brutal enemy, the Locust Horde.
When the Locust Horde burst from the ground fifteen years ago to slaughter the human population of Sera, mankind began a desperate war against extinction. Now after a decade and a half of bloody fighting, and with billions dead, the survivors - the Gears of the Coalition of Ordered Governments, along with a band of civilians - have been forced to destroy their own cities and sacrifice their entire civilization to half the Locust advance.
The last-ditch measures have succeeded, but at an enormous cost: the survivors have been reduced to a handful of refugees.
Escaping to a haven on the remote island of Vectes, they begin the heartbreaking task of rebuilding their devastated world. For a while, there's hope... making peace with old enemies, and once again planning for the future.
But the short respite is shattered when Vectes comes under siege from an even deadlier force than the Locust - the Lambent, a hideous and constantly mutating life-form that destroys everything in its path. As the Lambent's relentless assault spreads from the mainland to the island, the refugees finally understand what drove the Locust from their underground warrens and sparked the global war.
While Marcus Fenix and the Gears struggle to hold back the invasion, the Coalition faces a stark choice - fight this new enemy to the last human, or flee to the wastelands to take their chances and live like the human pariahs known as the Stranded... even as Coalition chairman Richard Prescott still guards one last, terrible secret about the Locust, the Lambent, and the future of mankind....

Review - Songs of the Dying Earth Edited by George R.R. Martin and Gardner Dozois (Part 2 of 3) 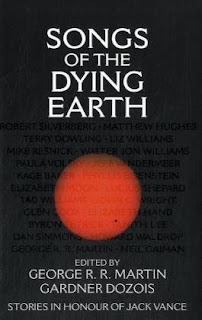 No, this is not a repeat post, only the second of three parts reading the anthology Songs of the Dying Earth.
Posted by Bryce L. at 8:41 PM No comments:

Review - Songs of the Dying Earth Edited by George R.R. Martin and Gardner Dozois (Part 1 of 3) 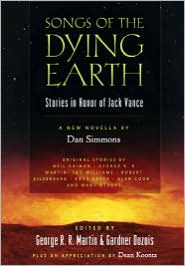 I can't ever do an anthology all in one sitting, but I got pretty close on this one. Songs of the Dying Earth is amazing.
Posted by Bryce L. at 8:48 AM 2 comments: