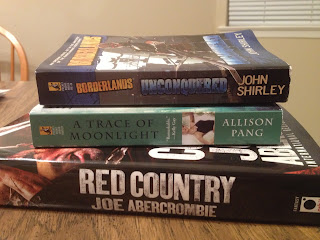 Borderlands: Unconquered (Borderlands #2) by John Shirley [Pocket] Amazon - I let my son play with this one and that's why it's a bit worse for the wear. Cool concept, but I've never played the game. Any good?

Everyone already knows that. But the General of an army of Psycho Soldiers takes on this planetary hell headfirst, planning to enslave all of the Borderlands. And that General . . . is a Goddess. The General Goddess, Gynella, is a cunning maniac who uses the dark science of the vile Dr. Vialle to control a growing army of bandits and malcontents. Only four people stand in Gynella’s way. Roland. Mordecai. Brick. And . . . Daphne.

Daphne?! Better known as Kuller the Killer, she was once the galaxy’s most effective assassin for organized crime—until her forced retirement on this abandoned wasteland of a world. Roland is one of the toughest fighters in the Borderlands, and Mordecai is the best shot in four solar systems—all the two really want is to get to the Crystalisks, harvest some Eridium, get rich, and leave the planet for the nearest intergalactic party. But there are nightmarish creatures to deal with: Varkids and Skags and Threshers. Worse, Gynella is still in their way. Brick—a pile of walking muscle who lives to smash his enemies, could be their ally or their enemy . . . but you’d definitely rather have him on your side. As for Daphne Kuller? Don't make her mad. Just . . . don’t.

If you want to hear about the whole thing, take a ride on the bus to Fyrestone with Marcus. Because Marcus has a tale to tell you . . . an untold story of the Borderlands.

A Trace of Moonlight (Abby Sinclair #3) by Allison Pang [Pocket] Amazon - The reviews are pretty good for this series, but this is number three and probably won't be happening. Cover's not doing it for me either.

Drinking from the waters of lethe and offering herself up as Faerie’s sacrificial Tithe . . . these just might be the least of Abby Sinclair’s problems. Abby’s pact with a daemon—whether or not she remembers making it—is binding, so she’d better count herself lucky that (in the words of a daemon who knows better) there’s nearly always a loophole. But her friends’ reckless attempts to free her, well intentioned though they may be, set off a disastrous chain of events. In no time at all, Abby turns her incubus lover mortal, then gets herself killed, cursed, and married to an elven prince whose mother wants her dead. On top of everything else, she’s lost the Key to the CrossRoads to her mortal enemy, who promptly uses his restored power to wreak havoc on the OtherWorld and put its very existence in jeopardy. Only one person can make things right again, but to find her, Abby must place her trust in allies of mixed loyalties, and conquer her nightmares once and for all.

Red Country by Joe Abercrombie [Orbit] Amazon - Woot! This is one of the top fantasy releases of the year and I may be a bit excited to jump in.

They burned her home.
They stole her brother and sister.
But vengeance is following.

Shy South hoped to bury her bloody past and ride away smiling, but she'll have to sharpen up some bad old ways to get her family back, and she's not a woman to flinch from what needs doing. She sets off in pursuit with only a pair of oxen and her cowardly old step father Lamb for company. But it turns out Lamb's buried a bloody past of his own. And out in the lawless Far Country the past never stays buried.

Their journey will take them across the barren plains to a frontier town gripped by gold fever, through feud, duel and massacre, high into the unmapped mountains to a reckoning with the Ghosts. Even worse, it will force them into alliance with Nicomo Cosca, infamous soldier of fortune, and his feckless lawyer Temple, two men no one should ever have to trust . . .

I was way too excited about this so I took a picture. This book's not easy to get ahold of, especially not for $0.25. 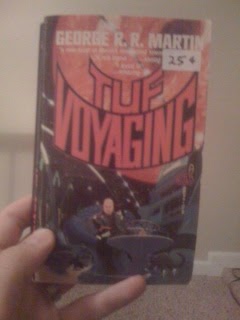 Terrible picture (I know! Blame the crappy phone), but very excited about that find.
Posted by Bryce L. at 10:49 PM No comments:

Here are some ARC's I may have forgotten to mention over the last couple months. 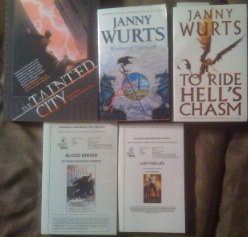 The Tainted City (Shattered Sigil #2) by Courtney Schafer [Night Shade Books] Amazon - Loved the first and can't wait to dive into this one. Will be reading this next. (Book 1 review)


Dev is a desperate man. After narrowly surviving a smuggling job gone wrong, he’s now a prisoner of the Alathian Council, held hostage to ensure his friend Kiran — former apprentice to one of the most ruthless mages alive — does their bidding.

But Kiran isn’t Dev’s only concern. Back in his home city of Ninavel, the child he once swore to protect faces a terrible fate if he can’t reach her in time, and the days are fast slipping away. So when the Council offers Dev freedom in exchange for his and Kiran’s assistance in a clandestine mission to Ninavel, he can’t refuse, no matter how much he distrusts their motives.

Once in Ninavel the mission proves more treacherous than even Dev could have imagined. Betrayed by allies, forced to aid their enemies, he and Kiran must confront the darkest truths of their pasts if they hope to save those they love and survive their return to the Tainted City.

Warhost of Vastmark (Wars of Light and Shadow #3) by Janny Wurts [HarperVoyager] Amazon - This is an amazing series that keeps getting more and more complex, for those who really want to get immersed in a world. (Book 1 review)


Tricked once more by his wily half-brother, Lysaer, Lord of Light, arrives at the tiny harbor town of Merior to find that Arithon's ship yards have been abandoned and meticulously destroyed, and that the Master of Shadow has disappeared as if into thin air. Meanwhile Arithon and the Mad Prophet Dakar are traveling on foot through the treacherous Kelhorn Mountains towards the Vastmark clans, there to raise further support for his cause. But raising a warhost is a costly business. Is it mere coincidence that Princess Talith—Lysaer's beautiful, headstrong wife—is taken captive and held for a vast ransom by a master brigand? The forces of light and shadow circle and feint, drawing ever closer to a huge conflict. And in the background the Fellowship of Seven Sorcerers and the Koriani Enchantresses watch and plan, and wait.

To Ride Hell's Chasm by Janny Wurts [HarperVoyager] Amazon - I'm actually currently reading this and so far it's excellent as expected.


When Princess Anja fails to appear at her betrothal banquet, the tiny, peaceful kingdom of Sessalie is plunged into intrigue. Two warriors are charged with recovering the distraught king's beloved daughter. Taskin, Commander of the Royal Guard, whose icy competence and impressive life-term as the Crown's right-hand man command the kingdom's deep-seated respect; and Mykkael, the rough-hewn newcomer who has won the post of Captain of the Garrison - a scarred veteran with a deadly record of field warfare, whose "interesting" background and foreign breeding are held in contempt by court society. As the princess's trail vanishes outside the citadel's gates, anxiety and tension escalate. Mykkael's investigations lead him to a radical explanation for the mystery, but he finds himself under suspicion from the court factions. Will Commander Taskin's famous fair-mindedness be enough to unravel the truth behind the garrison captain's dramatic theory: that the resourceful, high-spirited princess was not taken by force, but fled the palace to escape a demonic evil?

Blood Winter (Horngate Witches #4) by Diana Pharaoh Francis [Pocket] Amazon - I can't deny the blurb looks pretty good, but at number 4 in the series, I probably won't be giving this a go. There's just too much out there and some things need to get cut.


Set in apocalyptic America and featuring a magically enslaved heroine who is “a riveting mixture of guts, compassion, and furious anger as she struggles with a world coming apart at the seams” (Romantic Times), the fourth in a dynamic dark urban fantasy series unlike anything you’ve ever read before.
Winter is coming to Montana and Shadowblade warrior Max is expecting trouble. People are hoarding everything. They are banding together, many flocking to the congregation of Sterling Savage, a fire-and-brimstone preacher. A charismatic cult leader who claims to be the Hand of God, he’s determined to create a human utopia and destroy all magic, starting with witches.

Unbeknownst to him, the “divine” voice he’s been hearing isn’t God but a demon that feeds on hate, death, and destruction. Savage is the perfect puppet for the demon’s ambitions. Max and her people at Horngate are all that stand in its way, and they are woefully unprepared.

Conducting terrible, bloody ceremonies to boost his own power and that of the demon riding him, Savage starts a war between his congregants and two other powerful gangs in the city, fighting for food, fuel, clothing and territory. When he manages to capture Max’s niece, brother, and several teenagers from Horngate, Max tries to free them but finds that Savage has twisted their minds. They worship him—even her brother, who is a witch and whom Savage intends to burn at the stake. Going undercover in the cult compound, Max swiftly realizes just how seductive Savage is. His charisma is reinforced with magic. His followers adore him and will do anything for him. Anything.

But courage, loyalty, and friendship are powerful forces—and Max doesn’t like to lose.

Lust for Life (WVMP Radio #4) by Jeri Smith-Ready [Pocket] Amazon - I don't know what it is about the fourth book in the series lately, but this goes the same as above, very unlikely for me to read.


EVERYONE’S OUT FOR BLOOD—HERS Ciara’s con-artist parents taught her three keys to survival: keep low, keep quiet, and most of all, keep moving. But managing WVMP, the Lifeblood of Rock ’n’ Roll—not to mention becoming a vampire herself—has kept her in one place long enough to fall madly in love, adopt an undead dog . . .

. . . and make more enemies than she can shake a stake at.

A psychotic DJ, a wanna-be necromancer, and a posse of vengeful hippies would all love to see Ciara get her day in the sun—literally. To protect Ciara, her fiancé, Shane, has traded his flannel shirt and guitar for a flak jacket and crossbow. If she survives to walk down the aisle, will she recognize the man waiting at the altar?

In this final chapter of the award-winning WVMP RADIO series, Ciara must decide who to trust, whom to love—and whom to kill.