Tor has been good to me here at year's end. I just read Ian Tregillis' Bitter Seeds and it was excellent so this is a nice surprise to see his newest stand-alone novel. And then it goes without saying Dangerous Women is one of the books of the year. It's definitely the anthology of the year. Abercrombie, Sanderson, Grossman, Butcher, a story in Martin's own A Song of Ice and Fire series, and the list goes on. It's too good to be true. 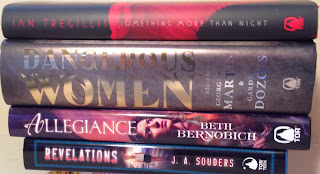 I actually just got a couple of these that arrived at a previous address. Luckily that previous address was to my wife's parent's house so I could actually get them. Apologies to Pocket/Gallery/Simon Schuster and Pyr. 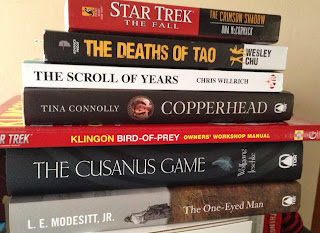 For review:
- Star Trek: The Fall: The Crimson Shadow by Una McCormack
- The Deaths of Tao by Wesley Chu (Lives of Tao #2) - Check out my review of The Lives of Tao here.
- The Scroll of Years (Gaunt and Bone #1) by Chris Willrich
- Copperhead (Ironskin #2) by Tina Connolly
- Star Trek: Klingon Bird-of-Prey Owners' Workshop Manual
- The Cusanus Game by Wolfgang Jeschke
- The One-Eyed Man by L.E. Modesitt, Jr. - The hardback of the ARC I received last month.
Posted by Bryce L. at 2:24 PM No comments:

I've been spending lots of time in the library lately, how can I go and not pick up a book or two that's for sale? It's just about impossible as it turns out. 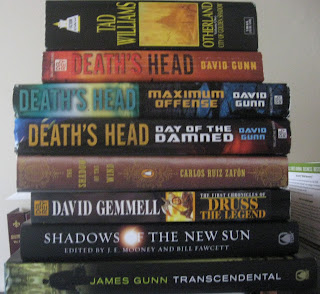 Used:
- City of Golden Shadow (Otherland #1) by Tad Williams - Been meaning to pick this up for a while.
- Death's Head by David Gunn - Picked these three up in their entirety for $1.20. My other blog gets a pretty constant stream of people to all of our David Gunn stuff, which occurred before I became a regular and it's peaked my interest. I guess no one knows who he/she is. Pays to be linked in Wikipedia too I guess.
- Death's Head: Maximum Offense by David Gunn
- Death's Head: Day of the Damned by David Gunn
- The Shadow of the Wind by Carlos Ruiz Zafon - Another that's been on the list a while.
- The First Chronicles of Druss the Legend by David Gemmell - Need to get back to these.

For Review:
- Shadows of the New Sun - This is an anthology dedicated to Gene Wolfe with two new stories from him. I read the first one and it was good ... if a little confusing as to its point.
- Transcendental by James Gunn - Speaking of Gunns. I don't know if I'll get to this, the reviews of people I trust have not been good.
Posted by Bryce L. at 10:24 PM 1 comment:

I've been meaning to try A. Lee Martinez for a while and Peter Clines has been making a splash lately with his Ex-Heroes series, plus some other good ones. 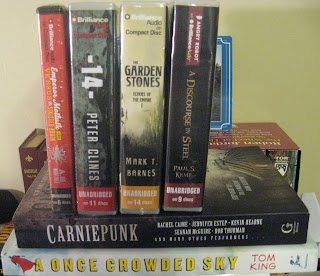 Audio (all from Brilliance Audio):
- Emperor Mollusk Versus the Sinister Brain by A. Lee Martinez
- 14 by Peter Clines
- The Garden of Stones by Mark T. Barnes
- A Discourse in Steel (Egil & Nix #2) by Paul S. Kemp

Paper:
- Carniepunk by multiple (Gallery)
- A Once Crowded Sky by Tom King (Touchstone)
Posted by Bryce L. at 4:10 PM 2 comments:

While I'm looking forward the the physical books this week, I'm extremely excited for the ebooks. One in particular... 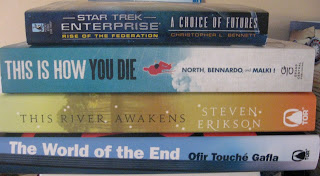 Star Trek: Enterprise: Rise of the Federation: A Choice of Futures by Chistopher L. Bennett

This is How You Die: Stories of the Inscrutable, Infallible, Inescapable Machine of Death, edited by Ryan North, Matthew Bernardo, David Malki ! - This is the follow up to the Machine of Death anthology which I enjoyed but never finished. I just felt like this concept was ... done to death. I read the first story and again it was good, but I just can't handle another batch of stories like this.

This River Awakens by Steven Erikson - This is Erikson's first novel that's being released for the first time in the US. Very much looking forward to it.

The World of the End by Ofir Touche Gafla - This is really an odd book that I'm about 30% through. I don't know if I like it yet, but it's certainly unique and compelling. There are a couple giveaways I listed on the other blog here.

Three by Jay Posey - I have to say it's about 99% cover that makes me want to read this. Plus you usually can't go wrong with Angry Robot.

The Companions (The Sundering #1)by R.A Salvatore - A Forgotten Realms event called The Sundering starts with their most famous author.

The Godborn (The Sundering #2) by Paul S. Kemp - Part of the event above, but number two.

The Rose and Thorn (Riyria Chronicles #2) by Michael J. Sullivan - The second.

The Republic of Thieves (Gentlemen Bastards #3) by Scott Lynch - Only the most anticipated book of the year if not the last couple years. Very happy to have this, I guess it's time to start Red Seas Under Red Skies since I waited until this was a sure thing before I would start RSURS.
Posted by Bryce L. at 2:11 PM 4 comments:

This first batch of the haul is probably the strangest (and yet still awesome) thing I've ever received for review. I can't say I have much use for them, especially the cross-stitching one, but I don't think a true fan could live without these: 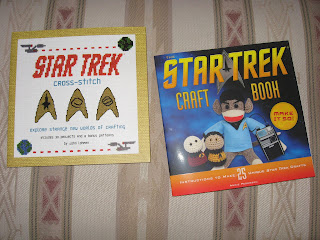 Next, we're keeping with the Star Trek theme... for some reason I can't quite put my finger on. 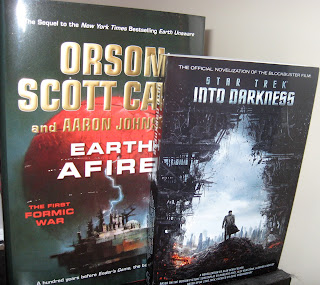 - Earth Afire (The First Formic War #2) by Orson Scott Card and Aaron Johnston
- Star Trek: Into Darkness by Alan Dean Foster - I don't usually go for movie novelizations, but this one does look really cool and the first few pages made it really hard to put down.
Posted by Bryce L. at 6:14 PM 2 comments: 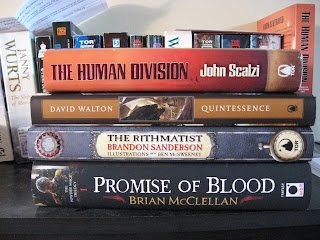 I can't deny, I was pretty excited about this week's haul. Tor just keeps 'em coming and a surprise from Orbit that I didn't think was coming.

- The Human Division by John Scalzi - This is the hardback in addition to the ARC you can see in the background
- Quintessence by David Walton - Usually I have to make a request from Tor, but sometimes books just show up and this is one of the latter. This is also never a bad thing. :)
- The Rithmatist by Brandon Sanderson - Very excited for this one!
- Promise of Blood by Brian McClellan - I just finished this one and needs a review. Very good.
Posted by Bryce L. at 5:02 PM 2 comments: 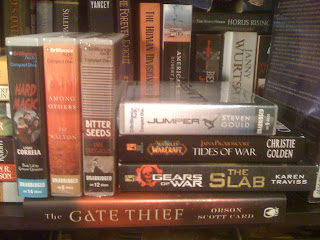 As a reviewer for sffaudio.com I've begun to receive ARCs in the form of audio as well as paper and electronic. Here are four I requested along with some other ARC's in the mail. Behind these books is pretty much my TBR for the next few months now that I take a good look at this picture.

- Hard Magic (Grimnoir Chronicles #1) by Larry Correia
- Among Others by Jo Walton
- Bitter Seeds (Milkweed Triptych #1) by Ian Tregillis
- Jumper by Steven Gould - The book the movie was based on.
- Jaina Proudmoore: Tides of War (World of Warcraft) by Christie Golden - Received the hardcover last year, here's the mmpb.
- Gears of War: The Slab by Karen Traviss - Also received the hardcover last year and can't believe it's already been a year. I meant to have had this read by now since I really enjoyed Coalition's End.
- The Gate Thief (Mither Mages #2) by Orson Scott Card - The Lost Gate came out last year and I really enjoyed even though I had a few problems with it.
Posted by Bryce L. at 5:59 PM No comments: 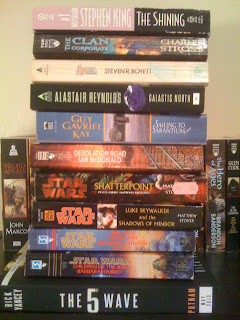 Lots of good used/new books bought and one ARC. I started buying all the Matthew Stover Star Wars novels and then got sucked into the Star Wars universe and had to get some more, but based on known authors still. For some reason the used book store owner didn't really understand inflation so all books (old and new) were half price from the listed price on the book. Made for some good deals though. 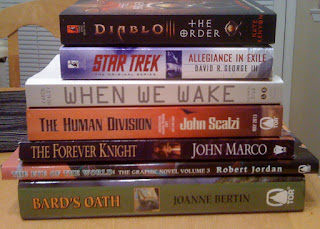 This was a great book haul this week, almost as good as the last one which is really hard to beat. Most of all, I was excited to get The Forever Knight by John Marco and the more I research about Joanne Bertin, it seems like the Dragonlord series will be right up my alley. 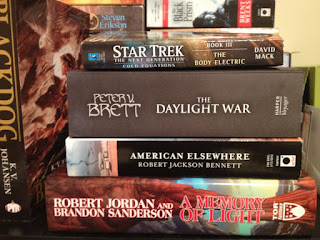 This was a great week for a nice haul of books. I really just want to drop everything and read...for like a year. I'm sure I'm unique in this wish.

-Star Trek: The Next Generation: Cold Equations III: The Body Electric by David Mack
-The Daylight War (Demon Cycle #3) by Peter V. Brett [currently reading]
-American Elsewhere by Robert Jackson Bennett
-A Memory of Light (Wheel of Time #14 and final book!) by Robert Jordan and Brandon Sanderson - This is actually a giveaway win instead of ARC like the rest from a great site - http://bestfantasybooks.com. If you like lists, and seriously who doesn't, check it out.
Posted by Bryce L. at 1:15 PM 6 comments: