My review is up for The Ten Thousand by Paul Kearney. Let's just say I'll be reading more Kearney in the future.
Posted by Bryce L. at 3:39 PM No comments: 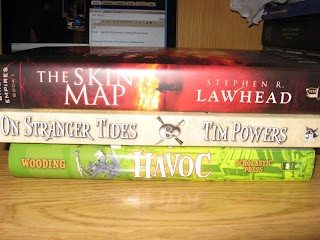 One for review and a couple from Amazon. Oh, and my blogger account open in the background. :)

"He had a sensation of being told a secret he knew to be true, but which would be far, far easier--and much safer--to ignore; all the more so since he strongly suspected that acknowledging the truth meant his life would change utterly."

Kit Livingstone's great-grandfather has re-appeared with an unbelievable story--the ley lines throughout Britain are not merely the stuff of legends but truly are pathways to other worlds. So few people know how to use them, though, that doing so is fraught with danger.

But one explorer knew more than most. Because of his fear of being unable to find his way home, he developed an intricate code and tattooed his map onto his skin. But the map has since been lost and rival factions are in desperate competition to recover it. What none of them yet realize is that the skin map itself is not the prize at the end of this race . . . but merely the first goal of a vast and marvelous quest to regain Paradise.

Enter the ultimate treasure hunt--with a map made of skin, a playing field of alternate realities, and a prize that is the greatest mystery of all.

On Stranger Tides [US] [UK] by Tim Powers (Babbage Press) - Getting ready for the new Pirates of the Caribbean movie.

On Stranger Tides is Tim Powers's great Disneyland ride through pirates, puppeteers, treasure, and thrill a minute action that carries on from page one.

In 1718, John Chandagnac, a bookkeeper and puppeteer, unwittingly sails into the company of Blackbeard the pirate, encounters zombie-crewed wrecks, and is caught up in a search for the Fountain of Youth.

Seth finally managed to escape the terrifying comicbook world of Malice, but he left his best friend Kady there. Now he must go back and rescue her. But can he find a way back in? Kady has her own worries. She's trying to reach Havoc, a group of rebel kids plotting to destroy Tall Jake, the evil ruler of Malice. But somebody is watching the comic and can see what everyone is up to. Is there no way to escape? 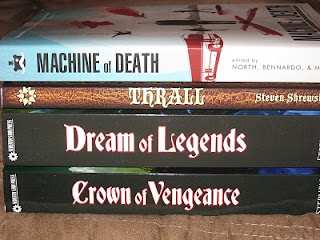 Seventh Star Press sent me a nice little package the other day, full of books along with other promotional items such as bookmarks. Plus there's some other stuff.

"The machine had been invented a few years ago: a machine that could tell, from just a sample of your blood, how you were going to die. It didn't give you the date and it didn't give you specifics. It just spat out a sliver of paper upon which were printed, in careful block letters, the words DROWNED or CANCER or OLD AGE or CHOKED ON A HANDFUL OF POPCORN. It let people know how they were going to die."
MACHINE OF DEATH tells thirty-four different stories about people who know how they will die. Prepare to have your tears jerked, your spine tingled, your funny bone tickled, your mind blown, your pulse quickened, or your heart warmed. Or better yet, simply prepare to be surprised. Because even when people do have perfect knowledge of the future, there's no telling exactly how things will turn out.

Set in the mists of ancient times, Thrall tells the story of Gorias La Gaul, an aging warrior who has lived for centuries battling the monstrosities of legend and lore. It is an age when the Nephilum walk the earth, demonic forces hunger to be unleashed, and dragons still soar through the skies … living and undead. On a journey to find one of his own blood, a young man who is caught in the shadow of necromancy, Gorias’ path crosses with familiar enemies, some of whom not even death can hold bound.

Thrall is gritty, dark-edged heroic fantasy in the vein of Robert E. Howard and David Gemmell. It is a maelstrom of hard-hitting action and unpredictable imagery, taking place within an incredible antediluvian world. In Gorias La Gaul, Thrall introduces an iconic new character to the realms of fantasy literature. Thrall invites the reader to go on a perilous journey where it is not a matter of whether one has the courage to die, but whether one has the courage to live.

On a night that begins no different from any other, strange mists engulf Janus Roland, Erika Laesig, Mershad Shahab, and several others going about their lives in a quiet midwestern town. When the mist dissipates, they all find themselves looking up into the bright skies of a new, incredible world.

Storms of war loom over both Saxany and the Five Realms, as invasion forces mass under the inspiration of The Unifier, a mysterious, captivating figure whose influence has swept across the surface of Ave ever since His rise to power in the Gallean duchy of Avanor. It is a war that will be fought in the skies, upon the seas, on land, and even in places non-physical in nature.

A majestic, epic fantasy that begins many adventures and journeys across a diverse and enthralling world, filled with races and creatures both familiar and new, Crown of Vengeance lights the flame of the Fires in Eden series, bringing to life a bold, far-ranging, and grand new venture within the realms of fantasy literature.

Dream of legends, and soar across the world of Ave…For Janus and the other exiles from a modern world, finding themselves in the fantastical lands of Ave was just the beginning. The assault upon the Kingdom of Saxany and the tribes of the Five Realms ignites, as the eyes of The Unifier turn southward, across the seas towards faraway Midragard. A desperate, dangerous time looms, when all will be swept up in the tides of war rippling out from Avanor.

Yet in the heart of the maelstrom, several lights begin to shine through the darkness. Some are on a path of discovery, to uncover the power that lies within, while others will brave perilous journeys, to seek out the things said to exist only in the faded mists of myth and legend. In the face of monstrous adversaries, massive armies, and even horrific entities summoned from infernal depths, courage and honor become the sword and shield in the hands of those who choose to resist.

Book Two of the Fires in Eden Series, Dream of Legends is immersive, epic fantasy, for those who love to explore richly developed fantasy worlds alongside an ensemble of intriguing, diverse characters. Readers of the great epic fantasy authors such as Robert Jordan, George R.R. Martin, Steven Erikson, and J.R.R. Tolkien will find a wondrous trove of adventure, characters, and depth in this next step of the Fires in Eden series.

Sorry for the lack of posting. I've been sick, my 5 month old's been sick (and not sleeping for the past 3 weeks) and now I'm just recovering from sickness number two in just under a month. The joys of having a kid. :)
Right now I'm reading for the Independent Literary Awards, of which I'm a judge in the Speculative Fiction category. I've mentioned this a bit before, but it's an award voted on solely by bloggers. We're down to the short list and therefore, I have lots of reading before we can pick a winner (which should be around the end of the month to early next month).
The Short list is:
Monsters of Men [US] [UK] - Patrick Ness
How to Live Safely in a Science Fiction Universe [US] [UK] - Charles Yu
Dante's Journey [US] [UK] - JC Marino (my review)
The Passage [US] [UK] - Justin Cronin
Kraken [US] [UK] - China Mieville
I've got two down, in the middle of a third and pretty much right on track to finish this list by the end of the month. Let's hope so. :)
Posted by Bryce L. at 3:39 PM 1 comment: