Sad to say, Thrall was not my favorite.
Posted by Bryce L. at 9:32 AM No comments: 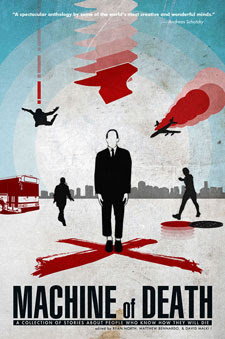 I like anthologies, but have a hard time sticking with them. Here's the first part of my review of Machine of Death.
Posted by Bryce L. at 9:57 AM 2 comments:

Email ThisBlogThis!Share to TwitterShare to FacebookShare to Pinterest
Labels: Machine of Death, review

Another great reread. I hope this continues. Here's my review for The Great Hunt.
Posted by Bryce L. at 9:42 AM No comments:

Shatnerquake [US] [UK] by Jeff Burk (Bizarro) - Already read this and it was ridiculously amazing, emphasis on the ridiculous. I Shat you not. How can you not order this immediately once you read this blurb:

After a reality bomb goes off at the first ever ShatnerCon, all of the characters ever played by William Shatner are suddenly sucked into our world. Their mission: hunt down and destroy the real William Shatner. Featuring: Captain Kirk, TJ Hooker, Denny Crane, Priceline Shatner, Cartoon Kirk, Rescue 9-1-1 Shatner, singer Shatner, and many more. No costumed con-goer will be spared in their wave of destruction, no red shirt will make it out alive, and not even the Klingons will be able to stand up to a deranged Captain Kirk with a light saber. But these Shatner- clones are about to learn a hard lesson . . . that the real William Shatner doesn't take crap from anybody. Not even himself.

Adventures of Huckleberry Finn and Zombie Jim [US] [UK] by W. Bill Czolgosz and Mark Twain (Gallery) - This looks pretty good. Bill Czolgosz sounds like a pretty funny guy from what I've read.

This ain't your grandfather's Huckleberry Finn.

It's nineteenth century America and a mutant strain of tuberculosis is bringing its victims back from the dead.

Sometimes they come back docile, and other times vicious. The vicious ones are sent back to Hell, but the docile ones are put to work as servants and laborers.

With so many zombies on the market, the slave trade is nonexistant. The black man is at liberty, and human bondage is no more. Young Huckleberry Finn has grown up in a world that shuns the N-word, with its scornful eye set on a new class of shambling, putrid sub-humans: The Baggers.

When his abusive father comes back into his life, Huck flees down the river with Bagger Jim, seeking a life of perfect freedom.

When the pox mutates once again, causing even the tamest of baggers to become bloodthirsty monsters, the boy Finn is forced to question his relationship with his dearest, deadest friend.

In this revised take on history and classic literature, the modern age is ending before it ever begins. Huckleberry Finn will inherit a world of horror and death, and he knows the mighty Mississippi might be the only way out...

Retribution Falls [US] [UK] by Chris Wooding (Bantam Spectra)- I've loved Wooding's YA books and I'm sure I'll love this. He's a master of plot, characterization, and general awesomeness.

Frey is the captain of the Ketty Jay, leader of a small and highly dysfunctional band of layabouts. An inveterate womaniser and rogue, he and his gang make a living on the wrong side of the law, avoiding the heavily armed flying frigates of the Coalition Navy. With their trio of ragged fighter craft, they run contraband, rob airships and generally make a nuisance of themselves. So a hot tip on a cargo freighter loaded with valuables seems like a great prospect for an easy heist and a fast buck. Until the heist goes wrong, and the freighter explodes. Suddenly Frey isn't just a nuisance anymore - he's public enemy number one, with the Coalition Navy on his tail and contractors hired to take him down. But Frey knows something they don't. That freighter was rigged to blow, and Frey has been framed to take the fall. If he wants to prove it, he's going to have to catch the real culprit. He must face liars and lovers, dogfights and gunfights, Dukes and daemons. It's going to take all his criminal talents to prove he's not the criminal they think he is ...