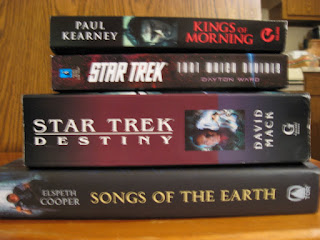 Kings of the Morning (paper, kindle) by Paul Kearney -

For the first time in recorded history, the ferocious city-states of the Macht now acknowledge a single man as their overlord. Corvus, the strange and brilliant boy-general, is now High King, having united his people in a fearsome, bloody series of battles and sieges. He is not yet thirty years old.

A generation ago, ten thousand of the Macht marched into the heart of the ancient Asurian Empire, and then fought their way back out again, passing into legend. It has been the enduring myth of Corvus' life, for his father was one of those who undertook that march, and his most trusted general, Rictus, was leader of those ten thousand. But he intends to do more. The preparations will take years, but when they are complete, Corvus will lead an invasion the like of which the world of Kuf has never seen. Under him, the Macht will undertake nothing less than the overthrow of the entire Asurian Empire.

Star Trek: That Which Divides (paper, kindle) by Dayton Ward -

Located in an area of non-aligned space near Federation and Romulan territory, the Kondaii system is home to a unique stellar phenomenon: a spatial rift that opens every three years in proximity to the system’s sole inhabited planet. Only during this brief period is communication possible with the small, mineral-rich planetoid inside the rift. The local population has established a mining colony on this planetoid, and for the limited du ration that the rift is open, a massive interplanetary operation is set into motion: ferrying mineral ore to the home planet while simultaneously transferring personnel and replenishing essential supplies and equipment—everything necessary to sustain the colony before it once again enters forced isolation.

While studying the rift, the science vessel U.S.S. Huang Zhong is severely damaged and crash-lands on the planetoid. After the Starship Enterprise arrives to conduct rescue operations, evidence quickly points to the rift’s artificial nature. It is a feat far beyond the capacity of the local inhabitants, and presents an alluring mystery for Captain James T. Kirk and his crew. It also attracts the attention of the Romulans, who are most interested in studying and perhaps seizing this supposed advanced technology—by any means necessary.

The omnibus edition of the epic crossover trilogy uniting characters from every corner of the Star Trek universe and revealing the shocking origin and final fate of the Federation's most dangerous enemy—the Borg.In Gods of Night, blitzkrieg attacks by the Borg leave entire worlds aflame. No one knows how they are slipping past Starfleet’s defenses, so Captain Jean-Luc Picard and the crew of the Enterprise have to find out—and put a stop to it.

In Mere Mortals, the Borg have found a secret passage through subspace and are using it to attack the Federation. But the passage is one of many that the Enterprise crew finds inside a nebula, and Captain Picard and Captain Ezri Dax must find the right one—and lead a counterstrike to stop the impending Borg invasion.

In Lost Souls, an armada of several thousand Borg cubes has wiped out a fleet of ships sent by the Federation and its allies. But the Collective’s goal this time isn’t assimilation—it’s extermination.

Destruction or salvation—only one can be her final Destiny.

Songs of the Earth (paper, kindle) by Elspeth Cooper - I actually just received another one of these so I'll have to do a giveaway. Very much looking forward to it although I can't stand the cover.

The Book of Eador, Abjurations 12:14, is very clear: Suffer ye not the life of a witch. For a thousand years, the Church Knights have obeyed that commandment, sending to the stake anyone who can hear the songs of the earth. There are no exceptions, not even for one of their own.

Novice Knight Gair can hear music no one else can, beautiful, terrible music: music with power. In the Holy City, that can mean only one thing: death by fire—until an unlikely intervention gives him a chance to flee the city and escape the flames.

With the Church Knights and their witchfinder hot on his heels, Gair hasn’t time to learn how to use the power growing inside him, but if he doesn’t master it, that power will tear him apart. His only hope is the secretive Guardians of the Veil, though centuries of persecution have almost destroyed their Order, and the few Guardians left have troubles of their own.

For the Veil between worlds is weakening, and behind it, the Hidden Kingdom, ever-hungry for dominion over the daylight realm, is stirring. Though he is far from ready, Gair will find himself fighting for his own life, for everyone within the Order of the Veil, and for the woman he has come to love.