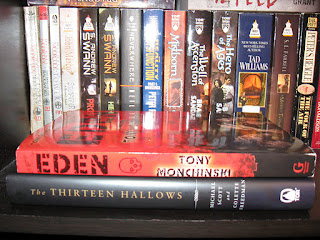 Eden (Kindle) by Tony Monchinski (Gallery) - This looks like a really cool zombie book. I will definitely be reading it.

Seemingly overnight the world transforms into a barren wasteland ravaged by plague and overrun by hordes of flesh-eating zombies. A small band of desperate men and women stand their ground in a fortified compound in what had been Queens, New York. They've named their sanctuary Eden.

Harris--the unusual honest man in this dead world--races against time to solve a murder while maintaining his own humanity. Because the danger posed by the dead and diseased mass clawing at Eden's walls pales in comparison to the deceit and treachery Harris faces within. 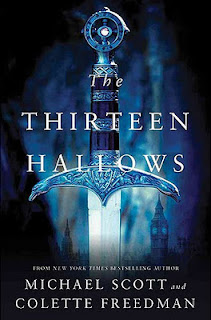 The Thirteen Hallows (Kindle) by Michael Scott and Colette Freedman (Tor) - Michael Scott is the author of the Secrets of the Immortal Nickolas Flamel series (beginning with The Alchemyst) and I really love the cover. Those are the two things I'm going off.

The Hallows. Ancient artifacts imbued with a primal and deadly power. But are they protectors of this world, or the keys to its destruction?

A gruesome murder in London reveals a sinister plot to uncover a two-thousand-year-old secret.

For decades, the Keepers guarded these Hallows, keeping them safe and hidden and apart from each other. But now the Keepers are being brutally murdered, their prizes stolen, the ancient objects bathed in their blood. Now, only a few remain.

With her dying breath, one of the Keepers convinces Sarah Miller, a practical stranger, to deliver her Hallow—a broken sword with devastating powers—to her American nephew, Owen.
The duo quickly become suspects in a series of murders as they are chased by both the police and the sadistic Dark Man and his nubile mistress.

As Sarah and Owen search for the surviving Keepers, they unravel the deadly secret the Keepers were charged to protect. The mystery leads Sarah and Owen on a cat-and-mouse chase through England and Wales, and history itself, as they discover that the sword may be the only thing standing between the world… nd a horror beyond imagining.

The Thirteen Hallows is the beginning of a spellbinding new saga, a thrilling tale of ancient magic and modern times by a New York Times bestselling author and an award-winning playwright.