Scrying the Fantastic is Alive!

Email ThisBlogThis!Share to TwitterShare to FacebookShare to Pinterest
Labels: Scrying the Fantasic

Each book that I read, I like to find out where the halfway mark is. I don't really know why, but it gives me a chance to set two goals I guess. One to get to halfway by a certain time and another to finish the rest.
This is probably good for a whole discussion itself, but back on topic - I was reading a book the other day and I got to page 550. I found out that I was 80 pages away from the halfway mark and it made me laugh.
Any guesses as to what book I'm slowly reading? (Hint - it's in a series)
This is probably either really easy for some forum members and really hard for others...sorry. :)
Posted by Bryce L. at 3:56 PM 9 comments:

Email ThisBlogThis!Share to TwitterShare to FacebookShare to Pinterest
Labels: Guess

Beware the ides of March, or...hem...the end of March, March 31st to be exact. A handful of bloggers all over the world have combined their might to create a resource that will (hopefully) be useful to science fiction and fantasy fans in the UK, with plans to move over to the US.
Scrying-the-Fantasic is the name and lots of information is it's game. More will be posted soon, along with the site launch.
Excited yet?
Posted by Bryce L. at 3:25 PM 2 comments:

Email ThisBlogThis!Share to TwitterShare to FacebookShare to Pinterest
Labels: Scrying the Fantasic

I'm currently listening to The Warded Man by Peter V. Brett and it's just plain awesome. This is the exact book I love to read.
In looking for a map for the book, for some reason he didn't put one in the audiobook :D, I found Peter's blog where he's giving away free signed bookplates. For those of us who can't make his signings, he's sending these (completely free of charge) to anyone who emails him (limited to the first 500).
Check out Peter's blog for the email address and directions on how to put your bookplate into your new copy of The Desert Spear.
Posted by Bryce L. at 1:41 PM 2 comments:

Some of my favorite people on the interwebs have started a collaborative blog over at Speculative Book Review and I couldn't be more excited. They've already got some great reviews up as well as an interview with Tad Williams.

Now, this isn't any ol' interview. This is Peter living the dream and interviewing his favorite author of all time. How cool is that? If you say less than uber-cool, you will be shunned. :)

On a similar note, I got an email from John Marco (Jackal of Nar) the other day and on a very small level, I know the feeling.
Posted by Bryce L. at 11:09 AM 5 comments:

Get on over to Only the Best Sci-Fi/Fantasy for my review of Book 2 in the Night Angel Trilogy, Shadow's Edge. This was a definite improvement over the first with one heck of a great ending. I refused to comment on the cover this time, don't worry.
Posted by Bryce L. at 3:46 PM No comments:

I finally had a chance to catch up a bit on Lost over the last week and I have to say I love this show (and Hulu). Now that doesn't mean I haven't had my problems with it; I had to take a break midway through seasons 2 and 3 because there was little to no plot development and it was driving me crazy.
Overall, I guess I like complex, mysterious stories with a slow moving plot as long as there's a reward of some crazy action. I mean, I do read Erikson.

But the main reason I enjoy Lost so much is because of the characters. There are so many shows with cardboard-cutout characters (now that's alliteration) where the jerk guy is always giving someone a hard time or where the protagonist always does the right thing whether people think she's crazy or not.
Lost is great because I hated Sawyer at the beginning and now he's my favorite character. This has happened with many of the characters for me in some form or another and I'm actually sad that the reverse has happened for Jack. But Lost does a great job with realistic characters that have really made me attached. Is it pathetic that I'm already sad there's no more Lost after this season?
Don't get me wrong, I'm really happy to have so many answers at one time I don't even know what to do with them.
Any other Lost fans out there? Waxing nostalgic already?
Posted by Bryce L. at 2:47 PM 8 comments:

Email ThisBlogThis!Share to TwitterShare to FacebookShare to Pinterest
Labels: Lost

Happy St. Patty's Day to all and to all a good night! Okay, maybe I got something switched up, but I hope you're having a great one.

I figured what a better time than to gather the latest news in fantasy and science fiction. There's some great stuff going on as well as some awesome covers being released, so here goes: 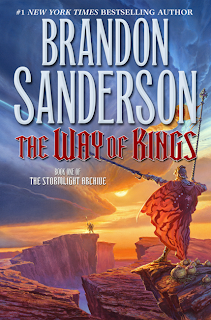 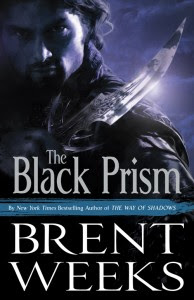 And that's about all I can come up with, hope you're wearing green or you might get a pinch from The Stamp. (I just realized I'm not, unless my belt counts...eek)
Posted by Bryce L. at 3:56 PM 4 comments:

Email ThisBlogThis!Share to TwitterShare to FacebookShare to Pinterest
Labels: It's News To Me

Review - The Way of Shadows by Brent Weeks

My review of The Way of Shadows is up over at Only the Best Sci-Fi/Fantasy. This was a highly engrossing tale that I was really impressed with.

I'm still recovering from those late nights.
Posted by Bryce L. at 9:58 AM No comments:

As I would never actually admit to a mistake, Sam's allowed me the following:

If anyone ever confronts you with this knowledge, you can cackle and say: "Yes, I knew all along, FOOLS!" This works best if you have a jetpack or something to make your escape in.

Luckily I happen to have my handy dandy jetpack around...doh!
Posted by Bryce L. at 2:28 PM No comments:

Email ThisBlogThis!Share to TwitterShare to FacebookShare to Pinterest
Labels: Correction

I have to apologize as it's been a bit slow around The Stamp this week. I had a couple job interviews for the summer and next fall as well as a test in my Torts class this week and I'm surprised I'm still standing. :)
Luckily, after this brutal week will be Spring Break. Yup, I haven't had a Spring Break in quite a few years. No, I don't have any big plans as my wife, Aubrey, still has to work, but I'm looking forward to doing a bit of relaxing, some reading, and catching up on all my classes not to mention finally starting my 20 page Appellate Brief. :)
Over the last little bit, I have had some time to read, so you can expect a couple reviews over the next bit including the following:
I just started Beyond the Shadows, the final installment in The Night Angel trilogy, I have A Betrayal in Winter by Daniel Abraham on hand, and Reaper's Gale by Steven Erikson has been eyeing me lately as well (although it's a daunting 1260 pages).
So, who's excited?
Posted by Bryce L. at 12:26 PM 2 comments:

Email ThisBlogThis!Share to TwitterShare to FacebookShare to Pinterest
Labels: updates

Yep, I did it, I finally finished all 36 CD's and it only took me about 6 months. When I first got into listening to audiobooks, I had a good hour commute every day and I was blazing through book after book. Now that I'm in school and the longest I may have to walk is 10 minutes, my audiobook listening has gone down drastically.
What can I say about World Without End that hasn't been said before. It's really long, no, that won't do...umm...oh, isn't there a rule about how many times a book can mention an erection without automatically becoming a romance novel?
Now don't get me wrong, I honestly don't even know if romance ever mentions the word, but what I was expecting was historical fiction. I couldn't help but imagine some dirty old man writing this book because that's much of what the characters thought about. I admit the fast forward button was used a bit.
Otherwise, World Without End is very entertaining with an amazing plot that twists more than a tornado. The characters are as flawed as anyone and although some are a little like cardboard cutouts (insert evil, selfish Lord here) the main characters are very sympathetic.
About midway through (around disc 18) I was amazed at how attached I was to this little town of Kingsbridge, England. Taking place in the 14th century, World Without End is the "sequel" to The Pillars of the Earth, dealing with the ancestors of those in the first novel. I say "sequel" because I've actually never read Pillars and it's not even necessary as World Without End is a completely stand-alone novel.
Just as the protagonists are getting ahead, they get knocked back. Most notably are Merthin, an apprentice builder, who is seduced into sleeping with his master's daughter only to find out she is pregnant with another man's child, and Caris, the daughter of the Alderman (head of the merchant guild), who is at one time accused of being a witch just after saving the town from ruin. And these are only a portion of their problems. What can you do when everyone is scheming to get ahead?
I didn't think I'd go this long, but I really felt like I experienced a piece of history. World Without End shows the feudal system where the rich Lord takes from his serfs who work the land. The more the Lord takes, the less the serfs had. It also showed the plight of the woman, especially the thinking woman. While very entertaining, World Without End does have its faults and I'll leave it up to you to decide as it is one heck of a doorstop.
3.5 out of 5 Stars

This has to be one of the funkiest covers I've ever seen. I actually own this version, picked it up at a used bookstore. This is Heinlein's classic fantasy and although I loved Starship Troopers, I had a really hard time with Glory Road. I actually gave up about halfway through although I think I'll try it again someday. Not that it was bad, just really odd. I don't think I was ready for it.
Any thoughts on this cover?
Posted by Bryce L. at 10:44 AM 2 comments:

Who's excited!? The highly anticipated television series based on George R.R. Martin's A Song of Ice and Fire has been given the greenlight by HBO. Read all about it at The Hollywood Reporter. Mr. Martin is a bit happy to say the least. I have to say, I really am too. This is easily one of my favorite series, one that in my early online days, I attempted to recommend to anyone and everyone despite its huge popularity. I was young then.

From the Hollywood Reporter:
"Nine episodes plus the pilot have been ordered. Production will begin in Belfast this June."
Did I mention I'm excited?:)
Posted by Bryce L. at 4:58 PM No comments: