One giveaway win, 3 review copies shown, and one review copy not shown...oh, and zero time for reading! Doh. 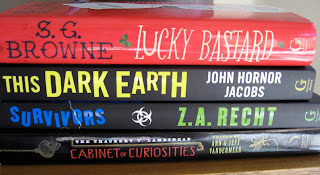 Lucky Bastard by S.G. Browne [paper, kindle] - Thanks to Bastard Books, whose giveaway I won, I will hopefully be enjoying this book soon. It looks really good.

Meet Nick Monday: a private detective who’s more Columbo than Sam Spade, more Magnum P.I. than Philip Marlowe. As San Francisco’s infamous luck poacher, Nick doesn’t know whether his ability to swipe other people’s fortunes with a simple handshake is a blessing or a curse. Ever since his youth, Nick has swallowed more than a few bitter truths when it comes to wheeling and dealing in destinies. Because whether the highest bidders of Nick’s serendipitous booty are celebrities, yuppies, or douche bag vegans, the unsavory fact remains: luck is the most powerful, addictive, and dangerous drug of them all. And no amount of cappuccinos, Lucky Charms, or apple fritters can sweeten the notion that Nick might be exactly what his father once claimed—as ambitious as a fart. That is, until Tuesday Knight, the curvy brunette who also happens to be the mayor’s daughter, approaches Nick with an irresistible offer: $100,000 to retrieve her father’s stolen luck. Could this high-stakes deal let Nick do right? Or will kowtowing to another greedmonger’s demands simply fund Nick’s addiction to corporate coffee bars while his morality drains down the toilet? Before he downs his next mocha, Nick finds himself at the mercy of a Chinese mafia kingpin and with no choice but to scour the city for the purest kind of luck, a hunt more titillating than softcore porn. All he has to do to stay ahead of the game is remember that you can’t take something from someone without eventually paying like hell for it. . . .

This Dark Earth by John Hornor Jacobs [paper, kindle] - From the author of the extremely well-received Southern Gods comes a zombie novel. I don't think I can pass it up.

In a bleak, zombie-ridden future, a small settlement fights for survival and looks to a teenager to lead them…The land is contaminated, electronics are defunct, the ravenous undead remain, and life has fallen into a nasty and brutish state of nature. Welcome to Bridge City, in what was once Arkansas: part medieval fortress, part Western outpost, and the precarious last stand for civilization. A ten-year-old prodigy when the world ended, Gus is now a battle-hardened young man. He designed Bridge City to protect the living few from the shamblers eternally at the gates. Now he’s being groomed by his physician mother, Lucy, and the gentle giant Knock-Out to become the next leader of men. But an army of slavers is on its way, and the war they wage for the city’s resources could mean the end of mankind as we know it. Can Gus be humanity’s savior? And if he is, will it mean becoming a dictator, a martyr, or maybe something far worse than even the zombies?

Survivors by Z.A. Recht [paper, kindle] - The third book in Recht's Morningstar Strain zombie trilogy, beginning with Plague of the Dead. The blurb looks good, but seeing as how this is the third one, I don't know if I'll get to this series. The above book also doesn't help either.

The long-awaited finale of Z.A. Recht’s “action-packed zombie extravaganza” (Ryan C. Thomas) that began with the acclaimed novels Plague of the Dead and Thunder and Ashes. . . .

THE MORNINGSTAR STRAIN WAS THE END OF THE WORLD.
In the wake of the zombie apocalypse, two separate bands of survivors journey across a decimated America, each with the desperate goal of finding the cure for the virulent plague that threatens the existence of humankind—or what’s left of it. Now it’s up to these inheritors of the future to outlive their waking nightmare, any way they can.

BUT FOR THESE SURVIVORS, IT IS JUST THE BEGINNING.
One group includes a brilliant virologist; for the other, an immune soldier proves invaluable. Battling infected and marauding raiders at every turn, the teams soon uncover the devious plans of Sawyer, an agent of the Chairman of the Reunited States of America, who believes that Dr. Anna Demilio already has the cure, and he will stop at nothing to find her. Now, with the salvation of the world and their own souls on the line, how far will the survivors go to emerge victorious?

The Thackery T. Lambshead Cabinet of Curiosities: Exhibits, Oddities, Images & Stories from Top Authors & Artists edited by Ann & Jeff VanderMeer [paper, kindle] - This may just be the coolest book I've ever received. This is such a great concept and I guess it's a sequel of sorts (to The Thackery T. Lambshead Pocket Guide to Eccentric and Discredited Diseases), but only in the relation to the main character as far as I can tell. Also, check out the other blog for a giveaway for this book in the next couple days.

A spectacular illustrated steampunk anthology with works from some of the most renowned and bestselling writers and artists in speculative and graphic fiction, including Mike Mignola, Alan Moore, Garth Nix, Naomi Novik, Cherie Priest, Lev Grossman, and China Mieville.

Orb, Sceptre, Throne by Ian C. Esslemont [paper, kindle] - This is the one not shown in the picture above. I didn't have time to grab it in our quick move to the in-law's house while my wife's on bed rest, but let's just say I'm HIGHLY looking forward to this. ICE seems to be getting better and better and he's taking us back to Darujhistan.


The epic new chapter in the history of Malaz -- the new epic fantasy from Steven Erikson's friend and co-creator of this extraordinary and exciting imagined world.

Darujhistan, city of dreams, city of blue flames, is peaceful at last; its citizens free to return to politicking, bickering, trading and, above all, enjoying the good things in life. Yet there are those who will not allow the past to remain buried. A scholar digging in the plains stumbles across an ancient sealed vault. The merchant Humble Measure schemes to drive out the remaining Malazan invaders. And the surviving agents of a long-lost power are stirring, for they sense change and so, opportunity. While, as ever at the centre of everything, a thief in a red waistcoat and of rotund proportions walks the streets, juggling in one hand custard pastries, and in the other the fate of the city itself.

Far to the south, fragments of the titanic Moon's Spawn have crashed into the Rivan Sea creating a series of isles... and a fortune hunter's dream. A Malazan veteran calling himself 'Red' ventures out to try his luck -- and perhaps say goodbye to old friends. But there he finds far more than he'd bargained for as the rush to claim the Spawn's treasures descends into a mad scramble of chaos and bloodshed. For powers from across the world have gathered here, searching for the legendary Throne of Night. The impact of these events are far reaching, it seems. On an unremarkable island off the coast of Genabackis, a people who had turned their backs upon all such strivings now lift their masked faces towards the mainland and recall the ancient prophesy of a return.

And what about the ex-Claw of the Malazan Empire who now walks the uttermost edge of creation? His mission -- the success or failure of which the Queen of Dreams saw long ago -- is destined to shape far more than anyone could have ever imagined.

Different Seasons [US] [UK] [Kindle] is a book of four novellas, three of which were turned into movies, and two of those three nominated for multiple Oscars. Incidentally, they're also the three novellas in this collection that aren't even King's typical fair - horror.

I haven't read a whole lot of King, but what I have I've loved. This set of books is supposed to be some of King's best writing and even with my limited experience, I can tell he's in top form. I've been on a King kick lately and couldn't resist reading the inspiration for one of my favorite movies, The Shawshank Redemption. I don't know if I'll get to the rest any time soon, but here's a review of the first:

(That's Rita Hayworth if you were wondering, the one in the movie the prisoners watch who tosses her hair.)

The movie is only titled "The Shawshank Redemption" and with the little research I did, I learned it was because they didn't want people thinking it was a movie about Rita Hayworth's life (before the movie was really underway, they received multiple solicitations from actresses to play the lead). 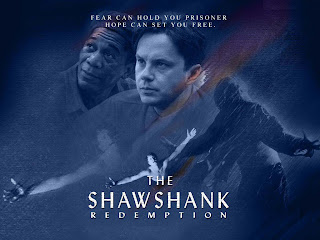 For me, and I'm sure plenty of other people, the movie and the novella will always be intertwined. Not only did I see the movie first (and as many times as it's been on TV), but I had no idea it was based on a Stephen King story. It's a classic in both formats.

Of course, directly after reading this, I had to watch the movie again, and it's really spot-on. There are actually very little changes made to the story (like what happens to Tommy) and absolutely nothing that changes the story in any way. I was honestly wondering if Stephen King thought the minor changes were actually improvements even.

Also, for some final movie trivia facts, King considers this movie, Stand by Me (film adaptation of The Body also contained in this book), and The Mist to be his favorite adaptations of his works.

I doubt you need a synopsis, but if you've been living under a rock and haven't actually seen the movie, this is a tale of an innocent man falsely sent to prison for killing his wife and her lover. It details his trials with people such as the "sisters," the ways prisoners cope (or don't cope) with prison life, and as the title of this section of the book suggests - hope.

I've been told that this is some of King's best writing and I have to admit it is some of the best I've ever read. So much of the movie is filled with the same narration as the book and even some of the same dialogue and there's a reason for it - there's no need to change it, it's perfect the way it is.


5 out of 5 Stars (You would not be disappointed to read this immediately)
Posted by Bryce L. at 12:20 PM No comments: