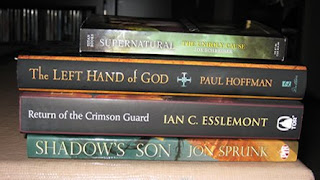 Happy Memorial Day everyone. I always think if my grandfather at this time of year. He was in the Navy serving on a supply ship in WWII. He used to tell all kinds of stories, but one of the most memorable for me was when they gave away all their supplies and were left only with beans to eat for the next month. Needless to say, I never ate a single bean when I went to visit my grandparents.

While I have some time on my day off, here's what I got this week:

I'm really excited about this one and was really surprised when it was suddenly delivered to my doorstep thanks to Pyr.

In the holy city of Othir, treachery and corruption lurk at the end of every street, just the place for a freelance assassin with no loyalties and few scruples.

Caim makes his living on the edge of a blade, but when a routine job goes south, he is thrust into the middle of an insidious plot. Pitted against crooked lawmen, rival killers, and sorcery from the Other Side, his only allies are Josephine, the socialite daughter of his last victim, and Kit, a guardian spirit no one else can see. But in this fight for his life, Caim only trusts his knives and his instincts, but they won't be enough when his quest for justice leads him from Othir's hazardous back alleys to its shining corridors of power. To unmask a conspiracy at the heart of the empire, he must claim his birthright as the Shadow's Son....

Return of the Crimson Guard [US] [UK] by Ian C. Esslemont

This one I purchased as soon as it was out in the states. Don't know why that was necessary since I have a couple I plan on reading beforehand, but it felt good all the same.

The return of the mercenary company the Crimson Guard could not have come at a worse time for the Malazan Empire. Driven by constant warfare, weakened by betrayal and rivalries, many see the grip of Empress Laseen beginning to weaken as conquered kingdoms and principalities test their old independence.

Into this gathering civil war on Quon Tali, the Empire’s homeland comes the Guard. And with their return comes the memory of their hundred-year-old vow — undying opposition to the existence of the Empire. Yet rivalries and betrayals stalk the Guard as well; elements of its elite, the Avowed, scheme to open paths to even greater power, and ancient potent entities, Ascendants, also lend a hand exploiting all sides to further their own arcane ends. Meanwhile, a swordsman, Traveller, and his companion Ereko, move from one strange encounter to another in a mysterious dance meant ultimately to bring the swordsman to a final confrontation from which none has ever returned.

The Left Hand of God [US] [UK] by Paul Hoffman

After the very mixed reviews on this one, I thought I'd give it a go when I was contacted about reviewing it for the US release.

The Sanctuary of the Redeemers is a vast and desolate place - a place without joy or hope. Most of its occupants were taken there as boys and for years have endured the brutal regime of the Lord Redeemers whose cruelty and violence have one singular purpose - to serve in the name of the One True Faith.

In one of the Sanctuary's vast and twisting maze of corridors stands a boy. He is perhaps fourteen or fifteen years old - he is not sure and neither is anyone else. He has long-forgotten his real name, but now they call him Thomas Cale. He is strange and secretive, witty and charming, violent and profoundly bloody-minded. He is so used to the cruelty that he seems immune, but soon he will open the wrong door at the wrong time and witness an act so terrible that he will have to leave this place, or die.

His only hope of survival is to escape across the arid Scablands to Memphis, a city the opposite of the Sanctuary in every way: breathtakingly beautiful, infinitely Godless, and deeply corrupt.

But the Redeemers want Cale back at any price… not because of the secret he now knows but because of a much more terrifying secret he does not.

Supernatural: The Unholy Cause [US] [UK] by Joe Schreiber

I wouldn't normally have accepted this book, I mean, I don't watch the show and the only reason I ever end up watching The CW is because of my wife. So why'd I do it? Well, Joe Schreiber is the author of Star Wars Death Troopers, which I have yet to read but heard lots of good things about and there ya go. Yup, that's it.

A Supernatural novel that reveals a previously unseen adventure for the Winchester brothers, from the hit CW series!

Way back in April 1862, Confederate Captain Jubal Beauchamp leads a charge across a Georgia battleground… Fast forward to 2009 and a civil war re-enactment becomes all too real. When Sam and Dean head down south to investigate they find that history has got somewhat out of hand… 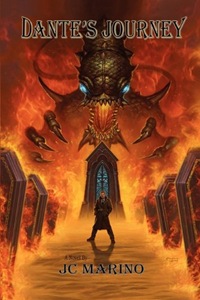 Review of Dante's Journey is up at Only the Best. Lots of fun this one was.
Posted by Bryce L. at 3:35 PM No comments:

Songs for the Summertime

Email ThisBlogThis!Share to TwitterShare to FacebookShare to Pinterest
Labels: Summer

(Audiobook) Review - Dinotopia: The World Beneath by James Gurney 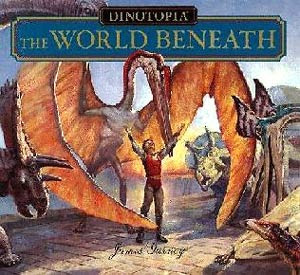 The best way to describe Dinotopia: The World Beneath is it's like a Disneyland theme park ride in your head. The production of this audiobook is just amazing. The characters walk by a stream and you hear the stream babbling by. Dragons fly by and you hear the roar. I was really impressed with this fun, short romp through Dinotopia.

When Arthur Denison leads an expedition deep into the mysterious caverns of The World Beneath, they discover strange mechanical walking machines shaped like dinosaurs and powered by sunstones.

This is the continuation of the original award-winning Dinotopia by James Gurney. Available as a hardcover book, or as an audio adventure!

When Arthur Denison explores the mysterious caverns of the World Beneath, he discovers an ancient civilization that in many ways is more advanced than our own. But his expedition is threatened by a greedy sailor, Lee Crabb, and by dinosaurs even larger and fiercer than the Tyrannosaurs, the meat-eating Gigantosaurus!

Reminiscent at times of Robert Lewis Stephenson's Treasure Island (especially Lee Crabb), Dinotopia: The World Beneath is the first sequel to James Gurney's Dinotopia. I didn't actually read Dinotopia beforehand, but The World Beneath was enough incentive for me to start looking for a copy of the original especially after taking a look at the amazing artwork which has won Hugo awards for best original artwork.

Dinotopia itself is an island where sentient dinosaurs and shipwrecked humans exist together peacefully (more info on Wikipedia). We mainly follow Arthur Denison who is a scientist who wants to know not only how everything works, but how he can improve society with his research.

As the blurb mentions, the cast of characters (and there really is a cast of actors that play each of the different characters), led by the possibly deviant Lee Crab, explores ancient caverns running into multiple Tyrannosaurus Rex among other dangers that await.

There are some fun twists but mostly the story is straight-forward and completely worth it for the production value. There were parts where echoes could be heard in the background and I could have sworn it was coming from outside rather than in the actual audio.

There's lots of action and adventure packed into a story that had it's only real drawback in being much too short. But, if you're going to have a drawback, this is a good one to have. Plus, there are more sequels available.

When Should You Listen to Dinotopia: The World Beneath?

As I mentioned earlier, this audiobook would work well as a Disneyland ride, but this also reflects the audience the story is meant for. I think children would absolutely love this, but I consider myself an adult (it's up for debate I know) and I had a great time.

The mp3's for Dinotopia: The World Beneath were provided to me by the kindness of ZBS Foundation. 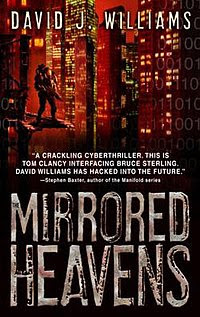 It's been a long week slash weekend, but here's my review of The Mirrored Heavens that's up over at Only the Best.

I've finished a few books in the last few weeks and I plan to put up a couple reviews not only on Only the Best (like usual) but also on this blog as well.

I'm back after the long hiatus. I'm sure you're sick of hearing about my finals, but they're finally over and summer can finally begin. Lots of reading ahead of me. :)

My review of The Zombie Survival Guide by Max Brooks (son of Mel Brooks) is up at Only the Best.
Posted by Bryce L. at 4:15 PM No comments:

Hope all you mothers out there are having a wonderful day. Lots of love. :)
Posted by Bryce L. at 5:02 PM 3 comments: 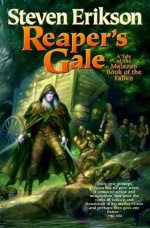 My review of Book 7 in the Malazan Book of the Fallen series, Reaper's Gale, is up at Only the Best. Let's be honest, it's book 7, are there really gonna be any surprises?
Posted by Bryce L. at 8:31 PM No comments: