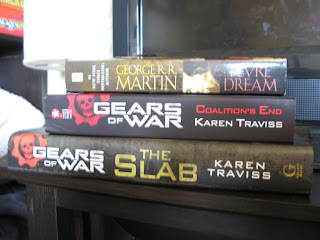 Fevre Dream by George R.R. Martin - Been wanting to read this for a while and this reissue is just too pretty to pass up.

A THRILLING REINVENTION OF THE VAMPIRE NOVEL BY THE MASTER OF MODERN FANTASY, GEORGE R. R. MARTIN

Abner Marsh, a struggling riverboat captain, suspects that something’s amiss when he is approached by a wealthy aristocrat with a lucrative offer. The hauntingly pale, steely-eyed Joshua York doesn’t care that the icy winter of 1857 has wiped out all but one of Marsh’s dilapidated fleet; nor does he care that he won’t earn back his investment in a decade. York’s reasons for traversing the powerful Mississippi are to be none of Marsh’s concern—no matter how bizarre, arbitrary, or capricious York’s actions may prove. Not until the maiden voyage of Fevre Dream does Marsh realize that he has joined a mission both more sinister, and perhaps more noble, than his most fantastic nightmare—and humankind’s most impossible dream.

Gears of War: Coalition's End by Karen Traviss - I actually already reviewed this when I got it last year in hardcover and really enjoyed it, way more than I thought I would...so I guess I should do something with this copy?

Understand what a world had to do to survive.

When the Locust Horde burst from the ground fifteen years ago to slaughter the human population of Sera, mankind began a desperate war against extinction. Now after a decade and a half of bloody fighting, and with billions dead, the survivors—the Gears of the Coalition of Ordered Governments, along with a small band of civilians—have been forced to destroy their own cities and sacrifice their entire civilization to halt the Locust advance.

The last-ditch measures have succeeded, but at an enormous cost: the survivors have been reduced to a handful of refugees.

Escaping to a haven on the remote island of Vectes, they begin the heartbreaking task of rebuilding their devastated world. For a while, there’s hope . . . making peace with old enemies, and once again planning for the future.

But the short respite is shattered when Vectes comes under siege from an even deadlier force than the Locust—the Lambent, a hideous and constantly mutating life-form that destroys everything in its path. As the Lambent’s relentless assault spreads from the mainland to the island, the refugees finally understand what drove the Locust from their underground warrens and sparked the global war.

While Marcus Fenix and the Gears struggle to hold back the invasion, the Coalition faces a stark choice—fight this new enemy to the last human, or flee to the wastelands to take their chances and live like the human pariahs known as the Stranded . . . even as Coalition chairman Richard Prescott still guards one last, terrible secret about the Locust, the Lambent, and the future of mankind. . . .

Gears of War: The Slab by Karen Traviss - Once you read the blurb, I don't know how anyone will not want to read this. There are few things cooler than a prison escape (I'm guessing).  Some of my favorite shows are Shawshank Redemption and Prison Break. Also, easily the best part of The Chronicles of Riddick is the prison planet Crematoria.

Ten years after Emergence Day, as the Locust Horde advances on humanity’s last defended area—Ephyra—in a bloody war that has seen billions die, Marcus Fenix does the unthinkable: he defies orders and abandons his post during a critical battle in a bid to rescue his father, weapons scientist Adam Fenix. But Adam is buried in the rubble during a ferocious assault on the Fenix mansion, and Ephyra falls to the enemy.

Marcus, grieving for a father everyone believes is dead, is court-martialed for dereliction of duty and sentenced to forty years in the Coalition of Ordered Government’s brutal maximum security prison, known simply as the Slab. But Adam is very much alive, snatched from the destruction by the elite Onyx Guard on Chairman Richard Prescott’s orders. He’s now a long way from home and in a prison of his own—a COG doomsday bunker on the tropical island of Azura, a place hidden from the rest of Sera since the Pendulum Wars. His own guilty secret has been exposed: Adam knew the Locust existed deep below the surface of Sera long before Emergence Day, and were being driven from their tunnels by a lethal parasite known as the Lambent.

Now he has to find a way to destroy the Lambent while the dwindling COG forces fight to hold back a growing Locust army that’s threatening to overrun the city. As Adam struggles to find redemption in his comfortable island jail, Marcus seeks his own atonement in the squalid, closed world within the Slab’s granite walls. While Dom Santiago and Anya Stroud fight to get him released, ready to make any sacrifice to free him, Marcus gradually finds unexpected kinship among Sera’s most dangerous criminals—and a way to carry on his personal war against the Locust.

“Adam, you knew this day would come.” It was a familiar voice: silky, imperial, polished, and utterly human. “Hello, Myrrah.” Adam Fenix found himself thinking of the terrible Locust food again. “You got my message, then.” “And how right you were. We do need you. And we shall take you. I hope you’re not planning anything foolish. You have responsibilities, Adam.” It would be a living death. The Locust Queen would never release him, even if he developed a countermeasure. But he didn’t deserve any better. “I also have my service pistol.” “And I can take your son at any time.” He had the measure of her, then, and she had his. “You leave Marcus out of this. It’s a condition.” He opened the desk drawer and took out the handgun, a 9mm officer’s weapon. It made a distinctive clunk on the wooden desktop as he slammed it down. “If anything happens to him, I don’t care what happens to the rest of Sera.”

I just updated my series "In Progress" and "Series Finished" lists, which you can find above, just under the Header image. The "In Progress" list is all the series I'm currently in the middle of reading. The "Series Finished" list is all the series I've read (at least that I can think of) and I've also included a general rating for the series. Through this process, I've found out a couple things about myself:
Considering the above, you'll have a hard time finding a poor rating for any of the series listed on the Finished list. It's probably not the most helpful list, but at least there's a bit of a gradient between 3 and 5 stars. That may help a little. :)
Posted by Bryce L. at 10:45 AM No comments: 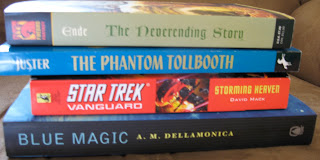 The top two are classics I had to have, especially to get ready to enjoy when my son's old enough to spend more than three seconds on a page. They're available on Kindle, but eBooks just don't do justice to books filled with illustrations.

The bottom two are for review although both are sequels and I don't have the beginning. However, my interest has definitely been piqued with regard to the A.M. Dellamonica series.

The Neverending Story by Michael Ende - Either his name is a pseudonym or he planned that from the beginning. Loved the movie and it's high time I give the book a go.


When it was published more than a decade ago, this special story within a story captured the hearts and imaginations of millions of readers worldwide. A lonely boy named Bastian is drawn into a beautiful but doomed world. Only Bastian can save this enchanted place of dragons, giants, monsters, and mysteries . . . but will he have to stay there forever? This beautifully repackaged hardcover classic will lure even more readers into its wondrous world.

The Phantom Tollbooth by Norton Juster - This is just a classic that I've been meaning to read for ages. Again, the cartoon is amazing, I'm sure the book's just as good.


For Milo, everything's a bore. When a tollbooth mysteriously appears in his room, he drives through only because he's got nothing better to do. But on the other side, things seem different. Milo visits the island of Conclusions (you get there by jumping), learns about time from a ticking watchdog named Tock, and even embarks on a quest to rescue Rhyme and Reason! Somewhere along the way, Milo realizes something astonishing. Life is far from dull. In fact, it's exciting beyond his wildest dreams...

Star Trek: Vanguard: Storming Heaven (Vanguard #8) by David Mack - This Vanguard series just looks cool. Each cover has tons of action and I really need to get into a Star Trek book some day.


“I WAS THERE UNTILTHE END, MATE. THE BITTER, BLOODY END.”


Vanguard is under siege. Surrounded by enemies, Admiral Nogura sends the scout ship Sagittarius to find an ancient weapon that might be the Federation’s only hope of stopping the alien threat known as the Shedai . . . Qo’noS is wracked by scandal. Councillor Gorkon fights to expose a Romulan plot to corrupt members of the Klingon High Council, only to learn the hard way that crusaders have few allies, and even fewer friends . . . Tholia teeters on the brink of madness. To prevent Starfleet from wielding theShedai’s power as its own, the Tholians deploy an armada with one mission: Kill the Shedai—by destroying Vanguard.

Blue Magic by A.M. Dellamonica - Like I said above, this book/series really intrigues me. Really should get my hands on the first book, Indigo Springs.

This powerful sequel to the A.M. Dellamonica's Sunburst Award–winning contemporary fantasy Indigo Springs starts in the small town in Oregon where Astrid Lethewood discovered an underground river of blue liquid—Vitagua—that is pure magic. Everything it touches is changed. The secret is out—and the world will never be the same. Astrid’s best friend, Sahara, has been corrupted by the blue magic, and now leads a cult that seeks to rule the world. Astrid, on the other hand, tries to heal the world.

Conflicting ambitions, star-crossed lovers, and those who fear and hate magic combine in a terrible conflagration, pitting friend against friend, magic against magic, and the power of nations against a small band of zealots, with the fate of the world at stake.

Blue Magic is a powerful story of private lives changed by earthshaking events that will ensnare readers in its poignant tale of a world touched by magic and plagued by its consequences.