Some biggies this week. I want to read everything, but there's just this little problem, I don't have enough ... places to talk about them. Did you think I was going for something else? :) 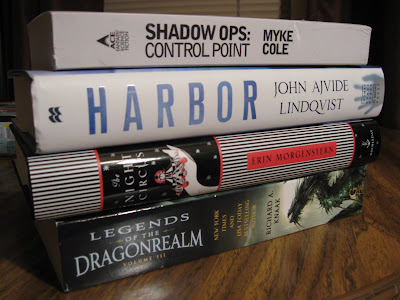 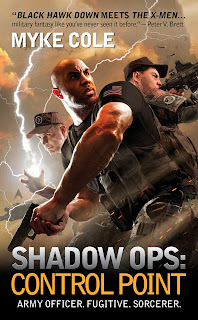 For a mil­len­nium, magic has been Latent in the world. Now, with the Great Reawak­en­ing, peo­ple are “com­ing up Latent,” man­i­fest­ing dan­ger­ous mag­i­cal abil­i­ties they often can­not con­trol. In response, the mil­i­tary estab­lishes the Super­nat­ural Oper­a­tions Corps (SOC), a deadly band of sor­cer­ers ded­i­cated to hunt­ing down “Self­ers” who use magic out­side gov­ern­ment con­trol. When army offi­cer Oscar Brit­ton comes up Latent with a rare and pro­hib­ited power, his life turns upside down. Trans­formed overnight from gov­ern­ment agent to pub­lic enemy num­ber one, his attempt to stay alive and evade his for­mer friends dri­ves him into a shadow world he never knew lurked just below the sur­face of the one he’s always lived in. He’s about to learn that magic has changed all the rules he’s ever known, and that his life isn’t the only thing he’s fight­ing for.

Harbor by John Ajvide Lindqvist (Thomas Dunne) - From the author of Let the Right One in, I'm excited to read my first book by said author.

“John Ajvide Lindqvist is rightly seen as one of the most exciting writers working in the horror genre at the moment – a rival, indeed, to Stephen King.” --TheScotsman.com

From the author of the international and New York Times bestseller Let the Right One In (Let Me In) comes this stunning and terrifying book which begins when a man's six-year-old daughter vanishes.One ordinary winter afternoon on a snowy island, Anders and Cecilia take their six-year-old daughter Maja across the ice to visit the lighthouse in the middle of the frozen channel. While the couple explore the lighthouse, Maja disappears -- either into thin air or under thin ice -- leaving not even a footprint in the snow. Two years later, alone and more or less permanently drunk, Anders returns to the island to regroup. He slowly realises that people are not telling him all they know; even his own mother, it seems, is keeping secrets. What is happening in Domaro, and what power does the sea have over the town's inhabitants?

As he did with Let the Right One In and Handling the Undead, John Ajvide Lindqvist serves up a blockbuster cocktail of suspense in a narrative that barely pauses for breath. 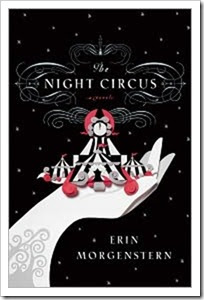 The Night Circus by Erin Morgenstern (Doubleday) - This is actually something I won. Haven't done that in a while. I really don't know what to think about this one though, the reviews have been up and down.

The circus arrives without warning. No announcements precede it. It is simply there, when yesterday it was not. Within the black-and-white striped canvas tents is an utterly unique experience full of breathtaking amazements. It is called Le Cirque des Rêves, and it is only open at night.

But behind the scenes, a fierce competition is underway—a duel between two young magicians, Celia and Marco, who have been trained since childhood expressly for this purpose by their mercurial instructors. Unbeknownst to them, this is a game in which only one can be left standing, and the circus is but the stage for a remarkable battle of imagination and will. Despite themselves, however, Celia and Marco tumble headfirst into love—a deep, magical love that makes the lights flicker and the room grow warm whenever they so much as brush hands.

True love or not, the game must play out, and the fates of everyone involved, from the cast of extraordinary circus per­formers to the patrons, hang in the balance, suspended as precariously as the daring acrobats overhead.

Written in rich, seductive prose, this spell-casting novel is a feast for the senses and the heart.

Legends of the Dragonrealm (Vol. III) by Richard A. Knaak (Gallery) - I really love the cover for this and all the blurbs, especially the one from R.A. Salvatore, have me looking for Vol. I.

The epic fantasy series Legends of the Dragonrealm continues in this omnibus edition by New York Times bestselling author Richard A. Knaak...including three bonus novellas in print for the first time! 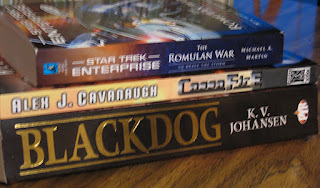 Star Trek: Enterprise: The Romulan War: To Brave the Storm by Michael A. Martin - Quite the title. Gotta be a record or something right? I will read a Star Trek novel, is 2012 the year?

The Coalition of Planets has shattered, with Vulcan, Andor, and Tellar abrogating the treaty. Their pledge to come to the mutual defense of any power that is attacked has been shunted aside. Horrified by how easily the Romulans can seize control of their advanced starships, turning them into weapons, Andor and Tellar have joined Vulcan on the sidelines. Humanity is now the only thing that stands between the Romulan Star Empire and total domination of the galaxy.

To drive humans from the stars, the Romulans employ ruthless and murderous tactics . . . and even dare to strike on the Vulcan homeworld with the hopes of demoralizing their Vulcan brethren. Heartened by their victories, the Romulans carry their all-out war assault closer to the heart of humanity—Earth.

But the tattered remains of Starfleet stand unwavering, with the resolution that never again would any enemy strike ever reach Earth. On the front lines of the Earth- Romulan War is the United Earth flagship, the Starship Enterprise. Her captain, Jonathan Archer, has seen his vessel of exploration become a battleship. Once hailed for his work bringing the Coalition of Planets into existence, Archer is now a pariah. Undaunted, the captain keeps fighting, searching for allies and determined to do his duty: to save Earth and forge a new federation of planets.

CassaFire by Alex J. Cavanaugh - I've missed these characters and I'm excited to get back into this series. Comes out Feb. 28, 2012.

CassaStar was only the beginning…

The Vindicarn War is a distant memory and Byron’s days of piloting Cosbolt fighters are over. He has kept the promise he made to his fallen mentor and friend - to probe space on an exploration vessel. Shuttle work is dull, but it’s a free and solitary existence. The senior officer is content with his life aboard the Rennather.

The detection of alien ruins sends the exploration ship to the distant planet of Tgren. If their scientists can decipher the language, they can unlock the secrets of this device. Is it a key to the Tgren's civilization or a weapon of unimaginable power? Tensions mount as their new allies are suspicious of the Cassan's technology and strange mental abilities.

To complicate matters, the Tgrens are showing signs of mental powers themselves, the strongest of which belongs to a pilot named Athee, a woman whose skills rival Byron’s unique abilities. Forced to train her mind and further develop her flying aptitude, he finds his patience strained. Add a reluctant friendship with a young scientist, and he feels invaded on every level. All Byron wanted was his privacy…

Blackdog by K.V. Johansen - I had to request this book immediately after reading this review at LEC Book Reviews.

In a land where gods walk on the hills and goddesses rise from river, lake, and spring, the caravan-guard Holla-Sayan, escaping the bloody conquest of a lakeside town, stops to help an abandoned child and a dying dog. The girl, though, is the incarnation of Attalissa, goddess of Lissavakail, and the dog a shape-changing guardian spirit whose origins have been forgotten. Possessed and nearly driven mad by the Blackdog, Holla-Sayan flees to the desert road, taking the powerless avatar with him.

Necromancy, treachery, massacres, rebellions, and gods dead or lost or mad, follow hard on the their heels. But it is Attalissa herself who may be the Blackdog's—and Holla-Sayan's—doom.

I jumped back into a couple series and I'm getting really far behind on my reviews.
Reading:

Dust of Dreams (Malazan 9) by Steven Erikson - 250 out of 889. Still plugging along and it's awesome. That first 100 or so pages was amazing and now we're back to the set-up phase, still good though.
Summer Knight (Dresden Files 4) by Jim Butcher - 100 out of 371. Picked this up randomly and suddenly I was 100 pages in. It's been a while since I read Grave Peril, but, and this is part of the reason I started taking longer breaks between Dresden books, it fills in all the details (and I mean all) as you go.
Everything You Ever Wanted To Know About Zombies by Matt Mogk - 80 out of 288. No progress. I'm letting this one sit for a bit. Good, but only in pieces, plus I'm trying to catch up on my goals.
Audiobook:
Shadow of the Hegemon by Orson Scott Card - 3 out of 11 CD's. Suddenly I'm reading tons of OSC, I don't know where this came from.
For Review:

Laddertop #1 by OSC and Emily Janice Card, Illustrated by Honoel A. Ibardolaza (manga)
Heaven's Needle by Liane Merciel - This was a great sequel that was even better than the first.
Low Town by Daniel Polansky - Been sitting on this to post, waiting to get closer to a possible interview.
The Prestige by Christopher Priest - Different enough from the movie to make it worth the read.
Posted by Bryce L. at 9:42 AM 4 comments: