Review - Return of the Crimson Guard by Ian C. Esslemont 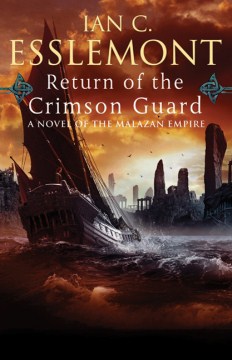 The review is up and boy did it turn out to be a tough one. There's so much going on in these books it's hard enough to wrap your mind around everything let alone review it.
Posted by Bryce L. at 3:48 PM No comments:

I'll try to keep it short as in just my thoughts about Metatropolis: The Dawn of Uncivilization [US] [UK]. In very short form, not a huge fan.
Some blurbage:

Sci-fi creators, Battlestar Galactica cast members, and star narrators have teamed up to craft a world of zero-footprint cities and virtual nations. It is a world where armed camps of eco-survivalists battle purveyors of technology. Where once-thriving suburbs have crumbled into treacherous Wilds. Welcome to the dawn of uncivilization.

Metatropolis is a collaboration of 5 science fiction authors; Jay Lake, Tobias Buckell, Elizabeth Bear, John Scalzi, and Karl Schroeder - with Scalzi as editor. They came together and thought up a distant future that they all sat down and started writing about. This anthology has the added benefit of having a short story collection that was built by the entire group and which stories could feed off each other.

Not to mention a great cast of audiobook readers staring some actors from Battlestar Galactica and the legendary Stefan Rudnicki, with John Scalzi giving an introduction to each story.

Now, I should have expected this, and I fully realize that especially after reading the blurb above, but Metatropolis was just too "messagy" - a word Kat from FanLit and I came up with when we were talking about the book (over email). I'm fine if you have a political agenda, but don't throw it down my throat...over and over and over again. (and over again)

I can say, however, that the stories that weren't all message were actually pretty good. Tobias Buckell's "Stochasti-city" and Karl Schroeder's "To Hie From Far Celinia" were both great reads (4 out of 5 stars). Scalzi's was pretty good too. Elisabeth Bear's story has no point whatsoever except the message I guess and I won't even go Jay Lake's.

Overall, the narration was amazing, some stories were pretty good, but I can't recommend it.

The review is up of Daniel Abraham's An Autumn War, Book 3 in The Long Price Quartet.
Posted by Bryce L. at 8:35 AM No comments:

In an effort to make my blog less annoying I've moved some stuff around, deleted some things (like that pesky LinkedIn at the bottom of each post), and added a search function, which I always find handy on others' blogs.
Hopefully that will help The Stamp load faster, generally keep things from getting bogged down, and make it easier to get around.
Now I just need to think about changing the rest of the blog look. I still like my header with the picture of my bookshelf (which has drastically changed since), so that may still change a bit, but I'm liking the crowns less and less.
Any ideas to improve the blog? Was the LinkedIn function even helpful?
Thanks in advance. :)
Posted by Bryce L. at 3:56 PM 6 comments:

Email ThisBlogThis!Share to TwitterShare to FacebookShare to Pinterest
Labels: updates 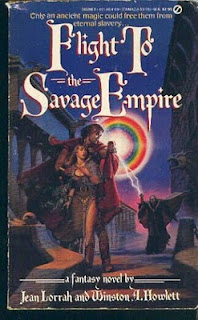 I can't watch this yet, but for those of you who've actually read through book 12, which I've heard there are a few, here ya go. Towers of Midnight by Robert Jordan and Brandon Sanderson, book 13 in the Wheel of Time, which means it's almost time for me to be able to start this series again.
Posted by Bryce L. at 10:42 AM 3 comments:

I tried really hard, I mean really hard. I even made it halfway through the book. But...
I could do it, I had to put it down. Even though I felt like I needed to finish for the sake of the challenge. Flight to the Savage Empire is just not worth my time. Forgive me please.

But, I figure that's one of the goals of the challenge. Let's find out what's good and what's not and warn each other if we have to. :D
"Full" challenge review will come later this week.
Posted by Bryce L. at 3:51 PM 11 comments:

I was thinking not too long ago about what if I just grabbed a random book from the bookstore and tried it out. One whose author I've never heard of before and maybe just because the cover strikes me in a certain way.

This challenge is particularly poignant for me because I'm normally one who has to research every purchase, especially books. Why don't I give that many bad reviews? Because I look up multiple blogs, forums, etc. to find something I'm almost 100% positive I will like.

So, we're trying to find those "diamonds in the rough". And while we know this won't work out best for everyone, as a collective, maybe we can find some really good stuff that no one has read.

If you have a blog, let us know and we'll link to you when you get a review up of your challenge book. If not, give us a comment or an email and we'll post about it.

Here are some books/people that will be joining us (compiled and written by Tyson of Speculative Book Review):

Shadows on the Glass by Ian Irvine 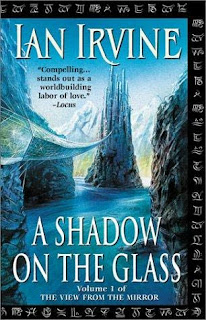 An ancient war closed the Way between the Worlds, leaving the four human races of Aachim, Faellem, Charon, and Santhenar to inhabit a single realm. Thousands of years later, Llian the Chronicler discovers an ancient and dangerous secret, while a young woman gifted with magic embarks on a search for a powerful artifact. Irvine's series opener promises a grand-scale epic fantasy that features a pair of unusual heroes and a complex world rich in history and variety.

PeterWilliam of Speculative Book Review stated that he picked the novel due to the fact that there were runes running along the edge of the cover. (Mmmm, runes. Milk please)

The Last Stormlord by Glenda Larke 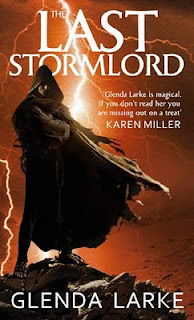 Shale is the lowest of the low-an outcast from a poor village in the heart of the desert. In the desert water is life, and currency, and Shale has none. But he has a secret. It's the one thing that keeps him alive and may save all the cities of the Quartern in the days to come. If it doesn't get him killed first...

Terelle is a slave fleeing a life as a courtesan. She finds shelter in the home of an elderly painter but as she learns the strange and powerful secrets of his art she fears she may have traded a life of servitude for something far more perilous...

The Stormlord is dying in his tower and there is no one, by accident or design, to take his place. He brings the rain from the distant seas to his people. Without a Stormlord, the cities of the Quartern will wither and die.

Their civilization is at the brink of disaster. If Shale and Terelle can find a way to save themselves, they may just save them all. Water is life and the wells are running dry...

I (Tyson) picked this one because my mom sent it to me thinking that I would enjoy it.

Flight to the Savage Empire by Jean Lorrah and Winston Howlett

"Bloodlust! In the Aventine Empire, gladiator games still slake the multitudes' undying thirst for blood. Magister Astra hated the games - with her telepathic powers, she felt the warriors' agonies as her own. But the Master had once again sent her there to tend the wounded: it was a punishment - but for what? Even her strongest Reading couldn't tell her. Not until an unexpected death and an exotic, mind-bending drug brought her into the path of the ex-slave warrior Zanos did Astra begin to understand the web of deceit, greed, and vengeance that would send them both in a desperate - Flight To the Savage Empire."

Since all three of us have gone out on a limb we now are challenging our readers to go out there and find a book from an author you have never heard of or have heard of but know virtually nothing about them and give that author a chance. You just might find a new series to read and at the very worst you have something to complain about to your friends and families. Best of luck and good hunting

Also, if you have not stopped by and checked out these other great sites, please do and check out the books they chose for the Book Challenge:

Simcha at SFF Chat
Melissa at My World... in Words and Pages
Amanda at Floor to Ceiling Books
Thanks and Happy Challenging!