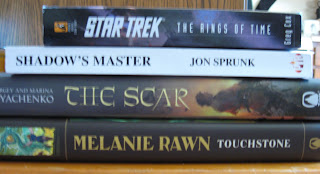 Since I run a blog with a co-blogger, usually I have to accept books for review from a publicist or the author him- or herself, but every now and then I get a random show-up. Pocket Books and Gallery have always been good to me, but this week I got a random show-up from Tor - Melanie Rawn's Touchstone.

I guess they know I'm a fan as I highly enjoyed her Dragon Prince series and even had a goal last year of reading something by her. This just jumped up high on my list.

Star Trek: The Original Series: The Rings of Time by Greg Cox (Pocket Books) - I said I will end up reading a Star Trek book at some point as I've yet to do so. This might be the one especially since it's based on the original series.

2020 The U.S.S. Lewis & Clark, under the command of Colonel Shaun Christopher, sets off on humanity’s first manned mission to Saturn. But the unexpected presence of a stowaway complicates the mission—as does a startling encounter with an alien probe. But when Colonel Christopher attempts to capture the probe, he suddenly finds himself transported across time and space to a future era of space exploration. . . .

Stardate 7103.4 The U.S.S. Enterprise responds to an urgent distress call from a mining colony orbiting Klondike VI, a ringed gas giant not unlike Saturn. For unknown reasons, the planet’s rings are coming apart, threatening the safety of the colony and its inhabitants. Searching for a way to avert the disaster, Captain James T. Kirk and his crew investigate a mysterious alien probe that has just entered the system. But when the probe is beamed aboard, Kirk abruptly finds himself floating in space above Saturn, wearing an old-fashioned NASA spacesuit, with the Enterprise nowhere in sight. . . .

Two missions. Two crews. And a time-twisting crisis that spans the centuries. . . .

Shadow's Master by Jon Sprunk (Shadow Saga 3) (Pyr) - The conclusion to the Shadow Saga, an amazing sword and sorcery trilogy, I couldn't wait to start this.

A land of death and shadow where only the strongest survive. Yet that is where Caim must go to follow the mystery at the heart of his life. Armed only with his knives and his companions, he plunges into a world of eternal night where the sun is never seen and every hand is turned against him.

Caim has buried his father’s sword and found some measure of peace, but deep in the north an unfathomable power lays waiting. To succeed on this mission, Caim will have to more than just survive. He must face the Shadow’s Master.

The Scar by Sergey and Marina Dyachenko (Tor) - The artwork is amazing and this is definitely in my anticipated for 2012 books. Will be reading this soon.

Reaching far beyond sword and sorcery, The Scar is a story of two people torn by disaster, their descent into despair, and their reemergence through love and courage. Sergey and Marina Dyachenko mix dramatic scenes with romance, action and wit, in a style both direct and lyrical. Written with a sure artistic hand, The Scar is the story of a man driven by his own feverish demons to find redemption and the woman who just might save him.

Egert is a brash, confident member of the elite guards and an egotistical philanderer. But after he kills an innocent student in a duel, a mysterious man known as “The Wanderer” challenges Egert and slashes his face with his sword, leaving Egert with a scar that comes to symbolize his cowardice. Unable to end his suffering by his own hand, Egert embarks on an odyssey to undo the curse and the horrible damage he has caused, which can only be repaired by a painful journey down a long and harrowing path.

Plotted with the sureness of Robin Hobb and colored with the haunting and ominous imagination of Michael Moorcock, The Scar tells a story that cannot be forgotten.

Touchstone by Melanie Rawn (Tor) - Really looking forward to this, been meaning to read more of her work lately.

Cayden Silversun is part Elven, part Fae, part human Wizard—and all rebel. His aristocratic mother would have him follow his father to the Royal Court, to make a high society living off the scraps of kings. But Cade lives and breathes for the theater, and he’s good—very, very good. With his company, he’ll enter the highest reaches of society and power, as an honored artist—or die trying. Cade combines the talents of Merlin, Shakespeare, and John Lennon: a wholly charming character in a remarkably original fantasy world created by a mistress of the art.

Although Touchstone can stand alone, it is the first book of a brilliant, utterly engaging new fantasy series from the author of the bestselling Dragon Prince series.

...having nothing to do with SFF. Sorry, I couldn't resist.