Seventh Star Press has been busy and here's their latest: 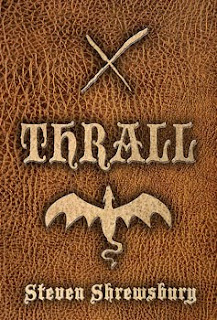 Set in an ancient world, Thrall is gritty, dark-edged heroic fantasy in
the vein of Robert E. Howard and David Gemmell. It tells the story of
Gorias La Gaul, an aging warrior who has lived for centuries battling the
monstrosities of legend and lore. It is an age when the Nephilum walk the
earth, and dragons still soar through the air … living or undead. On a
journey to find one of his own blood, Gorias' path crosses with familiar
enemies ... some of whom not even death can hold bound.

Having also worked with Steven on his novel Tormentor (Lachesis
Publishing), Louise Bohmer served as the editor on Thrall. "Working with
Steven Shrewsbury on a novel is an enjoyable experience. Steve is a
conscientious author who is easy to work with. His stories are grand
adventures in imagination,” Bohmer commented.

Steven Shrewsbury is a rising star in fantasy, with a host of published
work spanning novels, magazines, anthologies, and other publications. In
addition to the release of THRALL, Steven recently saw his collaboration
with Nate Southard, BAD MAGICK, published in hardcover by Bloodletting
Press. He has two other highly-anticipated releases on the horizon. His
collab novel with Peter Welmerink, BEDLAM UNLEASHED, was recently accepted
by Belfire Press for an early 2011 release. The novel HELL BILLY is to
be published by Bad Moon Books in 2012.

“Sometimes I think Steven Shrewsbury could very well be the reincarnation
of Robert E. Howard, in a writing sense,” commented fellow Seventh Star
Press author Stephen Zimmer. “As a huge fan of David Gemmell and Robert
E. Howard, I can say with absolute confidence that Steven Shrewsbury is
exceptional at writing dark-edged heroic fantasy. It is not an
exaggeration to say that Gorias La Gaul could one day join the heroic
fantasy pantheon with Conan, Druss the Legend, and other legendary fantasy
figures. I can’t wait to read more adventures with Gorias in the future.”

The Seventh Star Press editions feature cover art and additional
illustrations from fantasy artist Matthew Perry. The limited edition
packages feature the artwork in a special set of 5X7 glossy prints, a set
of bookmarks, and a full-sized Gorias poster that come with every
pre-ordered hardcover or trade paperback.

By the first week of December, the book will be available in hardcover,
trade paperback, and several eBook formats, for owners of the Kindle, the
iPad, the Nook, Sony eReaders, and other compatible electronic reading
devices.

An extensive series of special events and signings in support of THRALL
are in the planning stages, slated to begin in early 2011.

Updates and additional information can be obtained at the official site
for Seventh Star Press, at www.seventhstarpress.com , or at the author's
site at www.stevenshrewsbury.com