Not only did it rise above the hype, but the hype looks like an ant from up here. This is traditional fantasy done extremely well and with its own unique elements. The Warded Man (The Painted Man in the UK) [US] [UK] is exactly the type of fantasy I love.

As darkness falls each night, the corelings rise - demons who well up from the ground like hellish steam, taking on fearsome form and substance. Sand demons. Wood demons. Wind demons. Flame demons. And gigantic rock demons, the deadliest of all. They possess supernatural strength and powers and burn with a consuming hatred of humanity. For hundreds of years the demons have terrorized the night, slowly culling the human herd that shelters behind magical wards - symbols of power whose origins are lost in myth and mystery, and whose protection is terrifyingly fragile...

All of this in a world that's fully realized and well plotted; you're almost afraid to go out at night yourself. Each day I couldn't wait to put my headphones back on and get back into this world where wards are life, where becoming a good warder could save your life and making a mistake could get you killed. 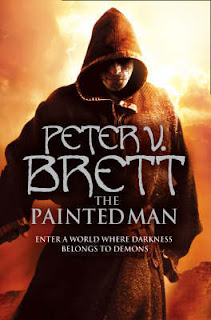 We are introduced early on-ish to three main characters, Arlen, Leesha, and Rojer (hope I got that right - no spelling on the audio for some reason). They live in three separate and distinct places and Brett does a great job showing how each part of the world deals with the problem of the corelings. Some tend to ignore them until problems occur. The smaller hamlets are constantly being attacked. But, almost everyone is on the defense and almost no one fights back.

Arlen is sick of living in fear and his dream is to become a messenger, one who braves the night while traveling in between the cities and towns to deliver well, messages, along with trade goods. This dream is only spurred by Arlen's cowardly father who's always taught Arlen to run and hide.

I thought Brett did a great job using traditional epic fantasy elements to create his own unique world. Of course there's a prophecy and a boy from nowhere who goes through a huge change, but the end result is unexpected. I was also entranced with the magic of the wards, which was very unlike traditional magic in fantasy and made for some great action especially toward the end.

When Should You Read The Warded Man?

This is the perfect page turner (at least I assume - should I say track turner?). It's full of action and really sucks you into a wonderfully imagined world full of danger and hope. I loved every bit of it, so I can recommend it for anywhere at anytime...but especially if you're in the mood for that great traditional feeling.