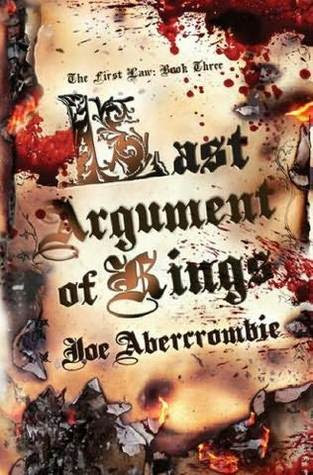 I guess it’s ironic that my first review is a book that is last in a series. It’s actually quite fitting because Joe Abercrombie seems to enjoy playing with the ideas of beginnings and endings and where they belong. Last Argument of Kings completes the First Law Trilogy and begins with a chapter called “The End” in The Blade Itself and ends with a chapter called “The Beginning” in Last Argument.

This book was a great way to finish off a great series. Look out for spoilers if you haven’t read the first two in the trilogy.

There is a quote on the book from sffworld that in essence describes this series as one for fantasy fans that want something traditional with a new spin and I’d definitely have to agree. In this installment, our band of world travelers (including Bayaz, Logan, Ferro, Jezal, and Longfoot) has just returned from their fruitless travels at the end of the world and it’s time to disperse. Logan heads north to fight the usurping King Bethod, while the rest remain in Adua where Bayaz obviously has some plan to put into action, which Jezal, to his consternation, will hardly be left out of. Glokta on the other hand is coerced to find (or buy - what’s the difference) votes in the race to come out on top when the Open Council chooses a new king. Add to that a peasant revolt and enjoy.

This is such a character-driven story and I thought Abercrombie was very true to his characters throughout the whole series, but that didn't mean anything could be expected. To explain: I thought the Bloody Nine was amazing, Hulk smash, and couldn’t wait for him to come back and beat up all the bad guys. The problem is, Abercrombie warned us throughout the book that he’s not a great guy; he’s actually someone to be feared. Events transpired that made me a little less excited to see the Bloody Nine come back and the worst part is that I felt like I should have known better. :)

We were also told that Bayaz isn’t always the friendliest guy and he definitely stays true to character, just maybe not exactly how one might expect. Jezal dan Luthar was a great character and I think the reason I liked him even when he was just a lazy fop was because there was some good in him, which begins to show toward the end of Before they are Hanged and into Last Argument. Besides Logan Ninefingers, I probably looked forward to Jezal's p.o.v. the most because it was fun to see him growing from his role as the lazy noble who let things happen to him.

I thoroughly enjoyed this ending to the series. It’s amazing how close you can get to such a rough and tumble crowd. I’m glad that it ended completely unexpectedly because it's hard to say anything more than that it fit the story, as much as I expected something different. Life’s tough and as Logan Ninefingers says, “once you know what has to be done, it’s better to do it, than to live with the fear of it.”

4.5/5 Last Argument of Kings gets Seak’s Stamp of Approval J
5/5 and Seak's Stamp for the Cover