When I heard that this book was basically The Lord of the Rings told from the perspective of the losing side, I had to check it out. It’s told in a similar lyrical manner and it is reminiscent of LotR, but it is its own story in its own world just in case you were wondering.

I have to say that Banewreaker really grew on me. At first I thought it would be a likeable book that would be fun just for the fact that it’s told from the “bad” guys’ perspective. But, I’ve really grown to enjoy the world of Urulat along with the great cast of characters who are all trying their hardest to do their best, good or bad. 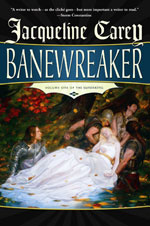 Book 1 in The Sundering

In the first few pages, we find out that there are 7 Shapers who have created the world of Urulat. Each Shaper has a certain gift. Satoris, the third born, is free with his gift to all of the creations of his siblings, but he is refused by his older brother, Haomane, who created the Ellylon (or pretty much the Elves). Haomane wants Satoris to take his gift back from Men and Satoris refuses. Thus begins the Sundering of the world and a time when Haomane spreads rumors declaring Satoris evil and Satoris is forced to take shelter with the Fjel (or the orcs for all intensive purposes).

And there you have it. Those that are considered “evil” are really just misunderstood. Don’t worry, this isn’t a huge spoiler since you learn all this in the first bit. What is great about this book is that each character believes he or she is doing the right thing. And really, who’s to say? Is it really the Ellyllons’ fault for following something they believe to be true? Are the Fjel really evil for helping a fellow being who’s in distress?

And the wonderful grey area continues to spread throughout the book. Tanaros, the immortal human general of Satoris’ army, really exemplifies this. Betrayed by his wife and king who had an adulterous affair, Tanaros kills them both and then finds sanctuary with Satoris in Darkhaven. Even though he is despised as the Betrayer or the Kingslayer in the realm of man, he is a champion in the eyes of those in Darkhaven.

One negative thing, but it really only has to do with the publishers. The Sundering was split into two books, Banewreaker and Godslayer, because it was getting too big. Together they total around 880 pages in mass market paperback, which normally isn't a big problem. Anyway, it's happened before and it's not a huge problem. The book's still great and I guess not so unwieldy to carry.

Who should read this? This is epic and lyrical and yet moves the plot very nicely. Read this when you’re in the mood for a change, when you want to get the feeling of what the other side is thinking; maybe it’s not all bad. Maybe we’re all just selfish and prideful. Whatever you do, you really should read it soon because it’s a great book.