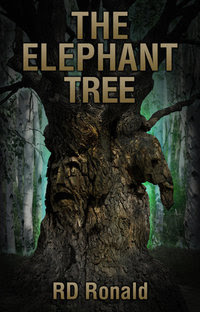 I was going to put this review on Only the Best like I normally do for books that haven't already been reviewed for that site, but because this one really isn't a fantasy or SciFi, I figured The Stamp was the best place for it.

When I was first offered The Elephant Tree [US] [UK] for review, I didn't quite know what to think. I really liked the cover and I thought it might be interesting but that's about it. Then I started reading and it's mostly about drug dealers and that's not really up my alley given my prudish upbringing.

Turns out, I'm really glad I read it.

The Elephant Tree is Ronald's debut and I have to say I'm really impressed. That's not to say this was a perfect book. It is a little disjointed in parts and some of the foreshadowing/set-up is a little confusing and the blurb on the back is kind of misleading. It talks about a character that has maybe 5 pages total involvement as if he's a main character.

Other than that, I was really attached to the actual main characters, Scott and Angela, and the plot definitely threw me for some loops. Scott is a drug dealer with bigger plans, but stuck in a rut and Angela is a drug dealer's daughter who's lived with it all her life. They both want more from life, but don't quite know how to get there.

The majority of the book, we follow Scott around through his life. He smokes weed, smokes a cigarette, drinks a pint, smokes more weed, rinse and repeat. This goes on for quite a while and I hate to bring up another negative point, because I really did like this book, but it was a bit ridiculous how much of a focus this book has on the above. Then again, that's a culture I'm completely unaware of and I have to admit it gives you a good sense of the lives of these characters and what they revolve around.

Scott has always been talking about leaving the drug dealing life and moving up and finally he's offered a chance to do just that. His friend Twinkle (nickname) has an "easy" job lined up and it would make them a lot of money. Of course this gets them in with a boss in town and that kind of relationship is not too easy to break.

The Elephant Tree is definitely worth the read. There are great characters, a great plot, and everything just fits together in a great timeline with a great pace.

Why Should You Read The Elephant Tree?

Our society is very interested in drug culture. Almost every movie you watch has at least a reference to drugs if not the plethora that actually revolve around drug dealing. Blow and Half Baked are the first that come to mind. The Elephant Tree was written by someone who has experienced this (it was mostly written from prison) and after reading it, I feel like I have a much better understanding of what goes on. Recommended.